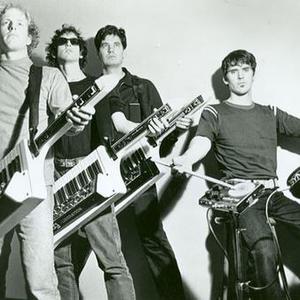 Six Finger Satellite (a.k.a. 6FS) are an American synthesizer-based post-hardcore band, based in Providence, Rhode Island. The band formed in 1990 around a line up of J. Ryan (singer/keyboards), John MacLean (guitar), Peter Phillips (guitar), Chris Dixon (bass), and Rick Pelletier (drums). They submitted a demo of watered-down grunge rock to Sub Pop Records, who, to their surprise, signed them and released the demo as the four-song Weapon EP in 1992.

The band formed in 1990 around a line up of J. Ryan (singer/keyboards), John MacLean (guitar), Peter Phillips (guitar), Chris Dixon (bass), and Rick Pelletier (drums). They submitted a demo of watered-down grunge rock to Sub Pop Records, who, to their surprise, signed them and released the demo as the four-song Weapon EP in 1992.

Six Finger Satellite's first full-length album, The Pigeon Is The Most Popular Bird, was released in 1993, with Kurt Niemand replacing Dixon on bass. The record more accurately represented the band's vision of cyborg-esque post-punk, and was recorded by Bob Weston, whose band Shellac named their 1994 single, The Bird is the Most Popular Finger in tribute. In 1994, 6FS released the Machine Cuisine EP, which was recorded entirely with synthesizers, suggesting the band's future direction. Their 7" single supposedly recorded "live at the A.C.I." was not actually recorded live at that prison, though its tongue-in-cheek liner notes purport thusly.

In the meantime, Phillips had left the band and Niemand had died of a drug overdose. James Apt (bass) joined for the 1995 album Severe Exposure, which represented a fusion of their synth- and guitar-driven sounds. The low-budget music video for the song "Parlour Games," from this album, was featured in an episode of Beavis and Butt-head. The synths became more dominant still on 1996's Paranomalized, especially on the porno/elevator-music song "Coke And Mirrors."

The band's final full-length was Law of Ruins, released in 1998 and produced by James Murphy. It was marked by a spacier sound, and was heavily influenced by Krautrock. The CD came in an entirely clear jewelcase with minimalist neon green graphic design/writing. Murphy's growing influence on the band, and his friendship with MacLean, led to tensions, and as a result MacLean left the group. He was replaced by Alex Minoff from the band Golden. In 1999, Ryan and Pelletier reformed the group replacing Minoff and Apt with Joel Kyack (guitar) and Shawn Greenlee (bass) from the group Landed. This incarnation of the group performed until 2001.

Six Finger Satellite attracted a significant underground following during the 1990s, and are today recognized for their somewhat prophetic fusion of electronic and post-punk music. In 2005, Jonathan Galkin remarked that "if a band came out today that sounded like Paranormalized, they'd be signed to a huge record deal, sight unseen." Similar bands that existed alongside 6FS in the 1990s included Satisfact, Trans Am, Brainiac, The V.S.S., and The Dismemberment Plan.

J. Ryan has performed as Von Ryan Express, named after the 1965 Frank Sinatra movie; he has also worked as an illustrator for album art and concert posters. John MacLean has since recorded as The Juan Maclean and Rick Pelletier plays in The Chinese Stars. James Murphy has gone on to form LCD Soundsystem and DFA Records. The label takes its name from his tour set-up for 6FS, which was known as "death from above."

A Good Year For Hardness

The Pigeon Is The Most Popular Bird