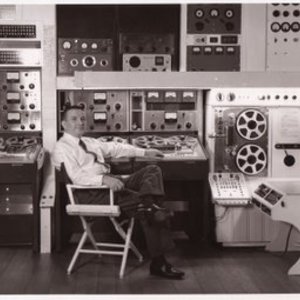 Raymond Scott (born Harry Warnow, 10 September 1908 ? 8 February 1994), was an American composer, orchestra leader, pianist, engineer, electronic instrument inventor and electronic music pioneer. He was born in Brooklyn to a family of Russian-Jewish immigrants. Though Scott never scored cartoon soundtracks, his music is familiar to millions because of its adaptation by Warner Bros. In 1936, Scott formed the "Raymond Scott Quintette", hoping to revitalise swing music through tight, busy arrangements and reduced reliance on improvisation.

He called this musical style "descriptive jazz," and gave his works titles like "New Year's Eve in a Haunted House," and "Dinner Music for a Pack of Hungry Cannibals" (recorded by the Kronos Quartet in 1993). It was these compositions that were sold to Warner Bros. in 1943.

Scott was an early experimenter with electronic music. In 1946 he established Manhattan Research, Inc. The lab developed some of the first devices capable of producing electronic tones automatically in sequence. Using such instruments, Scott recorded three ground-breaking albums designed to lull infants to sleep, Soothing Sounds for Baby, in 1964. The music, anticipating the ambient work of Tangerine Dream and Brian Eno, did not find much favour with the record-buying public of the day. Scott's electronic music for radio and television commercials was released posthumously as "Manhattan Research, Inc." in 2000.

The Music Of Raymond Scott: Reckless Nights And Turkish Twilights