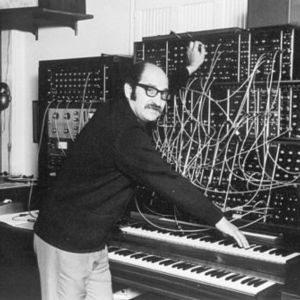 Mort Garson (born July 20th 1924 in Saint John, New Brunswick, Canada; died January 16th 2008, aged 83) was a prolific mid 20th century easy listening & pop composer and later an early electronic synthesizer pioneer. Early on Garson studied music at Juilliard and worked as a pianist and arranger before getting pulled into the Army near the end of World War Two. He could carry out any or all of the musical chores on any given session: composer, arranger, orchestrator, conductor, and even pianist if that was required.

He conducted the "Love Strings" on Liberty Records, arranged for The Lettermen on Capitol Records, provided background to Laurence Harvey reading poetry on Atlantic Records, accompanied Doris Day on Columbia and experimented with the Moog synthesizer on A&M Records, and that's just the tip of the iceberg. With lyricist Bob Hilliard, he wrote one of the great lounge hits of the 1960s, "Our Day Will Come," a hit for Ruby And The Romantics and more recently covered by k.d. lang and Take 6 for the soundtrack of the movie Shag.

Garson spent the mid-1960s on a rapid succession of accompaniment jobs: two Doris Day albums (Sentimental Journey and Songs for Latin Lovers), Mel Torme's great Right Now! album of contemporary covers like "Secret Agent Man," Glenn Yarborough's highly successful cover of Rod McKuen songs, The Lonely Things, and Glen Campbell's even more successful "By the Time I Get to Phoenix." He also appears to have been a favorite of producers when the job involved soft pop vocal groups and string ensembles, since his handiwork appears on albums and singles by the Lettermen, the Sandpipers, the Sugar Shoppe, the Hollyrdige Strings, the Sunset Strings, and the Love Strings.

The most highly prized Garson albums among collectors and exotica fans are his electronic albums of the late 1960s. The most famous is The Zodiac: Cosmic Sounds - Celestia Counterpoint with Words and Music, a suite of Garson originals released on Elektra Records covering the 12 signs of the zodiac, and featuring Paul Beaver on a variety of electronic instruments with voice-overs by Cyrus Farrar. This was the first album recorded on the West Coast to make use of Robert Moog's new Moog synthesizer. Garson returned to the moog for his album Electronic Hair Pieces, a classic artifact of the late 1960s, which is mainly cover songs from the hippie-influenced musical, Hair. The album cover features a mod model with a wired-up skull and liner notes by Tom Smothers of the Smothers Brothers. Another favorite (although extremely hard to find) is The Wozard of Iz, a psychedelic satire based on The Wizard of Oz with Bernie Krause providing a rich array of environmental sound effects and Suzi Jane Hokum voicing Dorothy (NOT Nancy Sinatra as often mistakenly stated).

With the success of the original Zodiac LP, he then went on to compose and arrange a 12 album series of zodiac albums for A&M Records, one album for each sign. Like Zodiac, each album contained original tunes with heavy use of electronics. He released an album in 1976 called Plantasia that you were supposed to play to make your indoor plants grow better. Garson also released a record of music-and-moans ("Music for Sensuous Lovers," Sensuous Anthem, 1971) to capitalize on the 1969 best-selling book The Sensuous Woman by "J" (which was itself adapted into a record by Tony Camillo and Connie Z in 1971). He wrote an electronic Black Mass album (United Artists, 1971) under the pseudonym Lucifer that again featured the way-out sounds of the Moog and was probably a big hit at many an acid party. The work has been likened to "666" by Aphrodite's Child (where Vangelis began his career). He followed that with one called "Ataraxia (The Unexplained)" (rca, 1975) designed to accompany meditations to the mantra of your choice.

Garson also worked in television and film, scoring a wide variety of music for many different movies and TV shows, from The Son of the Blob to Kentucky Fried Movie to National Geographic specials, although it is Elmer Bernstein who is credited with composing the well-known National Geographic orchestral theme that first appeared in on the magazine's TV specials in 1966.

A sample from Garson's "Planetary Motivations (Cancer)" was incorporated into DJ Shadow's 1996 song "Building Steam with a Grain of Salt," from the Mowax album Endtroducing.....'

The Wozard Of Iz. An Electronic Odyssey (Vinyl)

The Wozard Of Id (Vinyl)