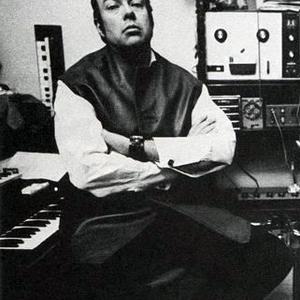 From Alberta to New York (1931-1988) Bruce Haack started picking out melodies on his family's piano at age four; by age 12, he gave piano lessons and played piano with the Swing Tones while attending the University of Alberta. The Swing Tones were a popular local band based out of Edmonton, Alberta, and they played in venues in the city and surrounding area. The band played primarily modern and old-time music, and they introduced him to Eastern musical motifs and themes, as they played quite a bit of Ukrainian folk music.

Bruce Haack started picking out melodies on his family's piano at age four; by age 12, he gave piano lessons and played piano with the Swing Tones while attending the University of Alberta. The Swing Tones were a popular local band based out of Edmonton, Alberta, and they played in venues in the city and surrounding area. The band played primarily modern and old-time music, and they introduced him to Eastern musical motifs and themes, as they played quite a bit of Ukrainian folk music. While with The Swing Tones, Bruck Haack was known for his uncanny ability to hear music and then play it back immediately from memory, and he could compose innovative riffs while the band was on break during a job. His talent was legendary, and he owned a tremendous record collection of music from around the world prior to moving to New York. In later years, Haack's painting of St. Basil likely is reminiscent of his earlier years with The Swing Tones in Edmonton.
Haack was also invited by Native Americans to participate in their pow-wows, experimenting with Peyote, which influenced his music for years to come. His upbringing in the isolated mining town of Rocky Mountain House, Alberta, Canada, gave him plenty of time to develop his musical talents.
Seeking formal training to hone his ability, Haack applied to the University of Alberta's music program. Though that school rejected him because of his poor notation skills, at Edmonton University he wrote and recorded music for campus theater productions, hosted a radio show, and played in a band. He received a degree in psychology from the university; this influence was felt later in songs that dealt with body language and the computer-like ways children absorb information.
New York City's Juilliard School offered Haack the opportunity to study with composer Vincent Persichetti; thanks to a scholarship from the Canadian government, he headed to New York upon graduating from Edmonton in 1954. At Juilliard, Haack met a like-minded student, Ted "Praxiteles" Pandel, with whom he developed a lifelong friendship. However, his studies proved less sympathetic, and he dropped out of Juilliard just eight months later, rejecting the school's restrictive approach.
Throughout the rest of his career, Haack rejected restrictions of any kind, often writing several different kinds of music at one time. He spent the rest of the 1950s scoring dance and theater productions, as well as writing pop songs for record labels like Dot Records and Coral Records. Haack's early scores, like 1955's Les Etapes, suggested the futuristic themes and experimental techniques Haack developed in his later works. Originally commissioned for a Belgian ballet, Les Etapes mixed tape samples, electronics, soprano, and violin; the following year, he finished a musique concr?te piece called "Lullaby for a Cat."
As the 1960s began, the public's interest in electronic music and synthesizers increased, and so did Haack's notoriety. Along with songwriting and scoring, Haack appeared on TV shows like I've Got a Secret and The Tonight Show with Johnny Carson, usually with Pandel in tow. The duo often played the Dermatron, a touch- and heat-sensitive synthesizer, on the foreheads of guests; 1966's appearance on I've Got a Secret featured them playing 12 "chromatically pitched" young women.
Meanwhile, Haack wrote serious compositions as well, such as 1962's "Mass for Solo Piano," which Pandel performed at Carnegie Hall, and a song for Rocky Mountain House's 50th anniversary. One of his most futuristic pieces, 1963's "Garden of Delights," mixed Gregorian chants and electronic music. This work was never broadcast or released in its complete form.

Haack found another outlet for his creativity as an accompanist for children's dance teacher Esther Nelson. Perhaps inspired by his own lonely childhood, he and Nelson collaborated on educational, open-minded children's music. With Pandel, they started their own record label, Dimension 5 Records, on which they released 1962's Dance, Sing, & Listen. Two other records followed in the series, 1963's Dance, Sing, & Listen Again and 1965's Dance, Sing, & Listen Again & Again. Though the series included activity and story songs similar to other children's records at the time, the music moves freely between country, medieval, classical, and pop, and mixes instruments like piano, synthesizers, and banjo. The lyrics deal with music history or provide instructions like, "When the music stops, be the sound you hear," resulting in an often surreal collage of sounds and ideas.
The otherworldly quality of Haack's music was emphasized by the instruments and recording techniques he developed with the Dance, Sing, & Listen series. Though he had little formal training in electronics, he made synthesizers and modulators out of any gadgets and surplus parts he could find, including guitar effects pedals and battery-operated transistor radios. Eschewing diagrams and plans, Haack improvised, creating instruments capable of 12-voice polyphony and random composition. Using these modular synthesizer systems, he then recorded with two two-track reel-to-reel decks, adding a moody tape echo to his already distinctive pieces.
As the 1960s progressed and the musical climate became more receptive to his kind of whimsical innovation, Haack's friend, collaborator, and business manager Chris Kachulis found mainstream applications for his music. This included scoring commercials for clients like Parker Brothers Games, Goodyear Tires, Kraft Cheese, and Lincoln Life Insurance; in the process, Haack won two awards for his work. He also continued to promote electronic music on television, demonstrating how synthesizers work on The Mister Rogers Show in 1968, and released The Way-Out Record for Children later that year.
Kachulis did another important favor for his friend by introducing Haack to psychedelic rock. Acid rock's expansive nature was a perfect match for Haack's style, and in 1969 he released his first rock-influenced work, Electric Lucifer. A concept album about the earth being caught in the middle of a war between heaven and hell, Electric Lucifer featured a heavy, driving sound complete with Moogs, Kachulis' singing, and Haack's homegrown electronics including a prototype vocoder and unique lyrics, which deal with "powerlove" ? a force so strong and good that it will not only save mankind but Lucifer himself. Kachulis helped out once more by bringing Haack and Lucifer to the attention of Columbia Records, who released it as Haack's major-label debut.
As the 1970s started, Haack's musical horizons continued to expand. After the release of Electric Lucifer, he struck up a friendship with fellow composer and electronic music pioneer Raymond Scott. They experimented with two of Scott's instruments, the Clavivox and Electronium. Nothing remains of the collaboration, and though Scott gave Haack a Clavivox, he did not record with it on his own. However, he did continue on Lucifer's rock-influenced musical with 1971's Together, an electronic pop album that marked his return to Dimension 5. Perhaps in an attempt to differentiate this work from his children's music, he released it under the name Jackpine Savage, the only time he used this pseudonym.
Haack continued making children's albums as well, including 1972's Dance to the Music, 1973's Captain Entropy, and 1974's This Old Man, which featured science fiction versions of nursery rhymes and traditional songs. After relocating to Westchester, PA, to spend more time with Pandel, Haack focused on children's music almost exclusively, writing music for Scholastic Press like "The Witches' Vacation" and "Clifford the Small Red Puppy." He also released Funky Doodle and Ebenezer Electric (an electronic version of Charles Dickens' A Christmas Carol) in 1976, but by the late 1970s, his prolific output slowed; two works, 1978's Haackula and the following year's Electric Lucifer Book II, were never released.

His darkest album to date, Haackula strikes out on into dark, yet playful territory. Haackula seems to have inspired Haack's final landmark work, 1981's Bite. The albums share several song titles and a dark lyrical tone different from Haack's usually idealistic style. Though Bite is harsher than his other works, it features his innovative, educational touch: a thorough primer on electronics and synthesizers makes up a large portion of the liner notes, and Haack adds a new collaborator for this album, 13-year-old vocalist Ed Harvey.
Haack's failing health slowed Dimension 5's musical output in the early 1980s, but Nelson and Pandel kept the label alive by publishing songbooks, like Fun to Sing and The World's Best Funny Songs, and re-released selected older albums as cassettes, which are still available today. In 1982, Haack recorded his swan song, a proto-hiphop collaboration with Def Jam's Russell Simmons, entitled Party Machine. Haack died in 1988 from heart failure, but his label and commitment to making creative children's music survives. While Dimension 5's later musical releases ? mostly singalong albums featuring Nelson ? may lack the iconoclastic spark of the early records, Nelson and Pandel's continued work reveals the depth of their friendship with Haack, a distinctive and pioneering electronic musician.

The Electronic Record For Children (Vinyl)