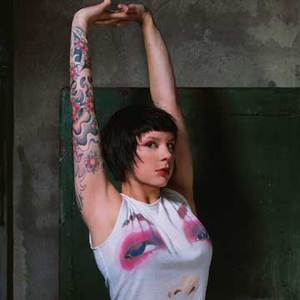 Miss Kittin (real name Caroline Herv?) is an electro vocalist and DJ. She was born in Grenoble, France in 1973. At age 22 she began DJing, spinning records in France, Moscow and Chicago with Mike Dearborn. Soon after she met DJ Hell in Marseille who wanted her to record for his International DeeJay Gigolos label. She presented him with the EP Champagne that she recorded with The Hacker. Miss Kittin & The Hacker released First Album in 2001. Several tracks, such as 1982 and Frank Sinatra, became anthems of the electroclash scene.

Kittin expressed an interest in the visual arts - she studied both contemporary and graphic arts. As time progressed, however, Kittin found herself emulating her parents' musical tastes by developing an interest in musical genres ranging from classic, jazz, funk, and disco to English Pop. Finding her niche in Electronic Music in 1991, Kittin raved all around the country before doing her first mix in April of 1993. Her first set came one year later in 1994, at which time she started her career with Tekmics Booking Agency, playing in the famous Dragon Ball wild parties of Southern France.

In pursuit of other opportunities, Kittin left France in 1996 and relocated to Geneva, Switzerland, where she would join the Mental Groove Record Posse one year later. Through years of an exciting and mobile career as a DJ, Miss Kittin is confident with her own personal sound. She states, "I get quickly bored when I listen to the same sound. DJs have to take risks, without only thinking about what people want to hear. Some people say I'm too technical. That's true, but this technique also gives me the freedom to concentrate only on music."

She has become one of the most important figures in electroclash, working with Felix da Housecat, Chicks on Speed, and Golden Boy. In 2002, she released a techno music compilation under her own name (Miss Kittin On The Road). Her debut solo CD I Com has elements from different electronic styles and is more experimental than her previous records.

In 2006, she released Miss Kittin Live at Sonar, recorded at the famous electronic music festival Sonar at Barcelona. She plays her own tracks, among others tracks from Aphex Twin, Modeselektor, Boom Bip. 2006 also saw the release of a double-disc CD Miss Kittin: Bugged Out.

Two years in the making and almost four years since her debut album I Com, Miss Kittin announced her second album, BatBox for a February 2008 release. BatBox comprises thirteen original songs, all composed whilst touring throughout the world.

Calling From The Stars CD2

Calling From The Stars CD1