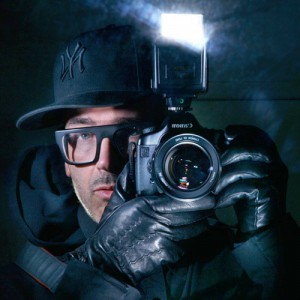 Larry Tee (born Lawrence Thom on October 12th, 1959) is an internationally-renowned DJ, club promoter, and music producer who coined the word Electroclash and helped launch the careers of such artists as Scissor Sisters, Fischerspooner, RuPaul, Peaches, and Avenue D, among others. The son of two Canadian-born citizens, Larry Tee grew up in Seattle, WA and in Marietta, GA. He moved to Atlanta in the early eighties, where he teamed with such drag personalities as RuPaul, Lady Bunny, Amanda Lepore, and Lahoma at the Celebrity Club in Atlanta.

The son of two Canadian-born citizens, Larry Tee grew up in Seattle, WA and in Marietta, GA. He moved to Atlanta in the early eighties, where he teamed with such drag personalities as RuPaul, Lady Bunny, Amanda Lepore, and Lahoma at the Celebrity Club in Atlanta. Music groups like 10,000 Maniacs, Butthole Surfers, and The Black Crowes all played at the venue at different times, and it has been described by Tee as ?a disco-punk club set in a pizza parlor on a sleazy strip in Atlanta?.[citation needed]

While in Atlanta, Tee's DJ style was always progressive, even back in the early 1980s when "you'd play Depeche Mode for these queens and they thought it was wild," he says. "But Atlanta was fabulous. We had a great time there. In our crew we had RuPaul and the Lady Bunny, who at the time were both just learning theft tricks. I really feel Atlanta was the birthplace of contemporary drag culture. We had some mean, nasty drag shows there."[citation needed]

Tee then travelled to New York City in the late eighties with RuPaul, Lady Bunny and Lahoma in a roadtrip that inspired the movie To Wong Foo, Thanks For Everything! Julie Newmar.[citation needed]

In the nineties, Tee's career soared as he was a key component of the internationally-popular New York Club Kids scene, making appearances on Geraldo, The Joan Rivers Show, and Inside Edition, which brought the Club Kid world ? with its' alternative views on gender, sexuality, music and fun ? to the national forefront. Tee helped make the parties Lova Machine and the raucous Disco 2000 with the infamous clubkid Michael Alig. One of his biggest successes at this time, however, was co-writing the RuPaul hit, ?Supermodel (You Better Work)?, which has since reached double-platinum on Billboard charts.[citation needed]

It was during this time that Tee became a drug addict.[citation needed] He got clean in 1997. Following that, Tee began to get his life together, launching a new phase of his career, the Electroclash years.

Tee coined the word ?Electroclash? after self-styling an ambitious new project called the Electroclash Festival and it's successful compilation. He coordinated and managed the 2001 Electroclash Festival, which helped the launch careers of Scissor Sisters, Fischerspooner, Ladytron and Peaches, who all participated in the festival. He also created and manged the nouveau-music electro girl group, W.I.T. Electroclash described a style of fashion, music, art and politics that fused new-wave, punk and electronic dance music with a campy and cryptic detachment. Since then, Electroclash has faced its critics, often by many of the artists whose careers it helped launch.

In 2005, Tee launched the party Distortion Disko, with nightlife legends Kenny Kenny, Sophia Lamar, Amanda Lepore and nightlife host and promoter, Josh Wood.[citation needed] The party just recently celebrated its one-year anniversary as a smashing success, with The Village Voice's Michael Musto listing it in his "Must Go" column.[citation needed]

In 2006, Tee collaborated again with promoter Josh Wood to produce Bank (at the nightclub "Element"). The party opened with regular nightlife hosts, such as Amanda Lepore and Sophia Lamar. Since then, it's been a regular venue for gay scenesters who want to experience the best of both mainstream gay and alternative hipster clubs.

Andy Warhol's Interview magazine says about him: ?Before Larry Tee became the "Emperor of Electroclash", the 44-year-old Brooklyn-based DJ, musician, club promoter, and Mogul Electro record label owner was reinventing international nightlife. The Atlanta native moved to New York in 1989 with friend RuPaul--for whom Tee wrote the curio hit song "Supermodel (You Better Work)"--and founded several of the city's legendarily bacchanalian club nights, which became hubs of creativity. Since then, the frenetic nightlife force helmed the Electroclash and Outsider Electronic Music festivals, discovering and promoting talent like the Scissor Sisters, art-rock impresarios Fischerspooner, and nouveau wave girls W.I.T. His current crop of collaborators includes manic performance artist Phiiliip, New York pop DJ Jon Jon Battles, and Conrad Ventur, a musician, performer, and photographer who documented the early 2000s downtown scene in the book ElectroDiscoPunks, due out next year. That Tee's influence extends from New York to London, Berlin, Tokyo, and beyond is de rigueur: He's long known that the New York club scene operates on a global scale. What he didn't know was how many artists, musicians, photographers, and personalities he would launch along the way.?