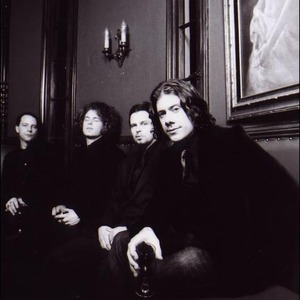 Borland states that Black Light Burns is the culmination of the various projects he has been working on ever since he quit Limp Bizkit in 2001. Things began with Big Dumb Face, a solo project that Borland had worked on during his time with Limp Bizkit. Borland didn't take the project too seriously, and used it to basically test the waters, and see how hard it would be to do something serious on his own, without the aid of his band mates. After he quit the band, he began working on several different projects. The first of which was supposed to be an instrumental album one could listen to and simply relax. Simultaneously, he began Eat the Day. With this project, he became cocky, and thought because of his previous success with Limp Bizkit, duplicating that success with a new band would be simple. Borland soon found out this wasn't the case. Eat The Day eventually unravelled itself, as, in Borland's words, "I think everybody involved in that project had different ideas about the direction that it should go". Borland became self-absorbed, and along with continuous pressure from the label, and struggles finding a lead singer for the band, the project eventually disbanded.

In terms of their lineup, the band is somewhat of a successor to the brief project The Damning Well, which consisted of mostly the same members. The main difference this time around being that Borland has taken vocals into his own hands, after many attempts to find a proper vocalist in various projects.

After the 'failure' of Borland's various projects, he returned to Limp Bizkit once again, turning down the spot as Nine Inch Nails touring guitar player. According to vocalist Fred Durst, Borland only agreed to return to the band on the condition that their label, Geffen, agreed to support his solo project, Black Light Burns.

It began only as a side project, with Borland writing many of the songs during his time off from Limp Bizkit, but soon things in Limp Bizkit became very quiet, and Borland himself stated that Black Light Burns was now his main project, and anything else he did, including Limp Bizkit, was a side project. Eventually arguments broke out on MySpace between Borland and Durst, and Borland left Limp Bizkit once again, although according to him, the band members had already gone their separate ways, he simply decided not to return.

The Black Light Burns song titled "I Have a Need" was instrumentally written to be included on the Limp Bizkit release The Unquestionable Truth (Part 1) in 2005, but was cut in order for the EP to remain mostly metal oriented. It features Limp Bizkit's bassist Sam Rivers on the track, and Wes was allowed to use the song for Black Light Burns when the song was turned down for use by Limp Bizkit.

On June 16, Borland announced that the band and Geffen Records had parted ways. There was little word in the following months over the situation regarding a new label, though as of October 25, the band is in negotiations with a label, and are hoping to release their debut album early 2007.

Borland has stated that he is the only constant in Black Light Burns, as the other members of the studio lineup are expected to be mostly unable to participate in touring with Black Light Burns, such as the notoriously busy Josh Freese.

The initial touring lineup of Black Light Burns includes Nick Annis (previously in Open Hand, Turn of the Screw) as a guitarist and Marshall Kilpatric (previously in The Esoteric) on drums, as well as Wes Borland himself.

Black Light Burns' first tour was previously set to begin in fall of 2006 with From First To Last, who Borland also plays bass for on and off. This tour was to feature Borland doing double duty as the singer/guitarist for Black Light Burns and then bassist for From First to Last afterwards. However, Sonny Moore (singer of FFTL) developed a node on his right vocal chord and has to get surgery, thus ending Wes Borland's current touring stint with From First To Last.

In late 2007-early 2008, after a scheduled break from touring for the their label to secure an overseas release of Cruel Melody, Black Light Burns announced plans for a covers album that also includes remixes and b-sides from Cruel Melody, and a DVD containing live and behind the scenes footage of the band. Artists PJ Harvey, INXS, The Jesus Lizard, Love and Rockets, The Swans, Fiona Apple, Lard, and Borland's own old side project Big Dumb Face will be covered for the release. The two discs will be released together in spring of 2008.

On March 30, 2008 Wes Borland made a post on the band's MySpace about how he filled in for the band X Japan and was "looking forward to coming home and getting back to work on the next BLB album", by which he means the second full length Black Light Burns album, due to the fact that their cover song album was already complete by that point in time.

As of August 2008, at the ETP Conference, it was announced that Borland is now the current Marilyn Manson tour guitarist.

Also Two new songs have appeared on http://www.myspace.com/wesleyborland. They are entitled Cats and Cats And Cats, B4Lf3r

Much like Nine Inch Nails, Black Light Burns consists of two entities, the studio band, and the live band. Some members of the band that recorded in the studio may not be able to tour with the band, and future live members might contribute to future CD releases, therefore lineup changes could occur. Borland did all of the vocals, guitar, and bass on the album.
Studio Line-up

When asked on Black Light Burns's MySpace if the studio band listed above would return for the band's second record, Wes Borland replied "Probably not. Marshall is the full time drummer for BLB now, but Danny Lohner may be returning for some input on the next record."
Live Line-up

Wes Borland's MacBook Pro will be playing the keyboard or loops that the four above bandmembers can't/won't be playing live. According to Borland, Josh Eustis, who played keyboards and sound design on Cruel Melody, was supposed to join the live lineup, but opted to do production instead, leaving Borland to use his laptop to reproduce samples and keyboards live.

The Moment You Realize You're Going To Fall