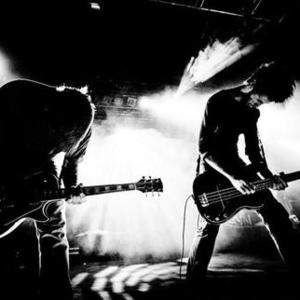 Cult of Luna are a Swedish Sludge/Post-Metal band formed in 1998 in Ume?, Sweden by guitarist/vocalist Johannes Persson and vocalist Klas Rydberg. After some member hunting and rehearsals CoL had its first line-up consisting of: Klas Rydberg, Johannes Persson, Magnus Lindberg, Erik Olofsson and Fredrik Renstrom. After a short period of time, Fredrik had to leave due to some personal difficulties.

When practice started to pay off, CoL recorded a two-track demo in January 1999. After some more rehearsals, the band felt that to fully live out their dream of sound experimenting, an additional member was needed to handle the electronics. Since Magnus had both knowledge and equipment, he was an obvious choice. Given that Magnus had handled the drums earlier they needed a new drummer, who they found in the mutual friend Marco Hilden. A new bass player was also found, named Axel Stattin. Another mutual friend helped CoL release their first record. Tim Bertilsson, head of Trust No One Recordings released a 7" split vinyl with his own band Switchblade.

Watching a concert at the Trastock Festival, year 2000, UK label Rage of Achilles got in contact with CoL. Pretty soon after that it was agreed that RoA was to release CoL's debut full-length album. Release date was September 14th 2001. In these days Hydra Head Records had also shown interest in CoL, and this co-operation resulted in a two-track 7" colored vinyl on HHR, released March 24th 2002. These two songs were recorded at the same time as the self titled full-length on RoA. Immediately after the release of the first album, news of the band's mammoth sound worked its way into cult circles and the band received rave reviews. Discerning listeners instantly appreciated the bands unique approach, trading light and dark to create music that hit the heart and the head in equal measures.

After the success of the first album, Earache Records contacted CoL and wanted to sign a record deal. After some negotiations CoL finally signed the contract. Immediately after that CoL entered Tonteknik Recording studios, in July 2002, to record their second album The Beyond. After the recording session Andreas Johansson joined in on bass, due to the departure of Axel Stattin. The Beyond was released February 10th 2003, to critical acclaim. CoL proved that they were now ready to bring their soundscapes to a much wider audience. After the release of The Beyond, CoL toured Sweden with The Haunted and the UK with Isis. After this the line up changed, drummer Marco Hilden was replaced by Thomas Hedlund and an additional keyboard player, Anders Teglund, was added as a permanent fixture. Magnus took care of the percussion and additional guitar parts.

At this point touring became a lot more frequent. Late summer 2003 CoL ventured into Europe with US hardcore sensations Poison the Well, to amazing press reactions. In December the same year CoL returned to the UK for a tour with art noise merchants The Dillinger Escape Plan. The early part of 2004 was mostly dedicated to writing songs for their follow up to The Beyond. They found the time to play a few long awaited shows in Sweden and Finland, before entering Tonteknik Recording studios once again in April 2004.

The recording of Salvation was done in three different sessions, thus enabling the band to take some rest and think about possible changes that needed to be done. Finally, in late July 2004 the album was complete. Salvation was released October 4th 2004 in Europe and Oct 19th in the US. This album marked a new era in the history of CoL, both visually and sonically. At the same time as Salvation was hitting the stores, CoL embarked on a Europe/UK headline tour, which also included Scandinavian dates. This tour introduced a new member, Fredrik Kihlberg, who joined in on percussion and clean vocals.

2005 was perhaps the most interesting year so far in the history of CoL. It started with a six week European tour, partly with American hardcore act Bleeding Through and partly by their own. This tour also saw a change in the live line-up. As Thomas couldn?t participate due to being busy playing with other bands, Magnus took over the live drumming. When the band came home they had the time to rest for about a month before departing to the US for the first tour over there. CoL supported the mighty Mastodon on the first leg of the tour, and headlined eight shows (supported by Breather Resist) on the latter part. The reception of the American audience was stunningly good for a first ever tour in the US. After the US-tour CoL did some Scandinavian and European festival shows before starting to work on the 4th full-length album Somewhere Along The Highway.

In November 2005 CoL began the recording of Somewhere Along The Highway. The first session was located to an old octagon barn ten minutes west of Umea. The vibe out there was perfect and seven days were spent there recording basic tracks. After some more sessions in the studio environment, Magnus mixed the last song in January 2006. Somewhere Along The Highway was released April 24th 2006 on Earache Records, followed by a European/UK headline tour.

A Dawn to Fear

Years In A Day CD2

Years In A Day CD1