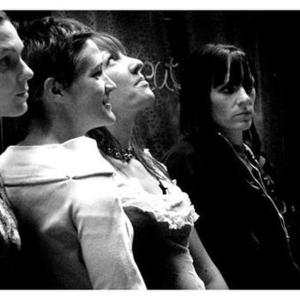 Subrosa is a doom/metal group hailing from Salt Lake City, UT in the United States. The current lineup of Rebecca Vernon (Guitar, vocals), Sarah Pendleton (Electric violin, vocals), Kim Pack (Electric violin, vocals), Dave "The Deuce" Jones( Bass) and Zachary Hatsis( Drums ) produces an eclectic mix of stoner/sluge metal with neoclassical undertones, boasting an almost subliminal post-riot grrrl vibe to boot thanks to their predominant feminine lineup. To quote Sarah,"We are attempting to be the sonic interpreters of that which is intangible."

The band's first full-length album, Strega, emerged in 2008 on I Hate records. Lineup instability undulated up to the following year's Swans Trapped in Ice EP, afterwhich the current lineup solidified and began conception. The sophmore release No Help for the Mighty Ones found release through leading indie metal label Profound Lore in early 2011, granting the group much-deserved praise and exposure.

The band has played festivals and shows in Salt Lake City, and a couple short tours in the US and Europe, recently rounding out CrucialFest with Witch Mountain.. They are presumably working on their next full-length release.

Other artists tagged as "Subrosa"

Subrosa(1997 - 2001) On September 8, 1995, while returning from playing the CMJ Music Marathon in New York City, the band For Squirrels was involved in the auto accident that killed founding members Jack Vigliatura and Bill White in addition to their tour manager Tim Bender. Surviving members Griego and Tooke suffered multiple injuries, but survived the crash.

By late 1996, the trio was playing under the name Subrosa. In the summer of 1997, they released their only record under this name, Never Bet the Devil Your Head, on Sony Records, to decent reviews but poor sales. Second guitarist Mike Amish was later added, which was followed by a tour supporting popular alternative rock act Creed. Griego eventually parted ways with the group and was replaced in the band's final years by Rusty Valentine. They disbanded in 2001.

Sub Rosa(2005-Present) is a indie group from Chicago, IL USA fronted by Jennifer Boeder and published by Blue Rose Records.

For This We Fought the Battle of Ages

More Constant Than The Gods

No Help For The Mighty One

The Worm Has Turned