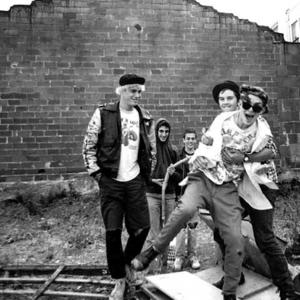 Operation Ivy was a highly influential ska/punk band that originated from the East Bay of San Francisco (in Berkeley) and was active from 1987 through 1989. They were credited as one of the first ska punk bands, influencing bands such as The Suicide Machines, Choking Victim and Authority Zero. The band consisted of frontman Jesse Michaels (vocals), Tim Armstrong (Credited as "Lint") (Vocals/Guitar), Matt Freeman (Credited as Matt McCall) (Bass/Backing Vocals), and Dave Mello (credited as Hujuku Girl) (Drums/Backing Vocals).

Armstrong also went on to perform with The Transplants, and contribute to Dance Hall Crashers, P!nk and on solo work.

Mello went on to perform with Schlong. There was a great deal of speculation regarding the fate of Michaels, with many fans believing that he had moved to Nicaragua or became a Buddhist monk. Michaels eventually resurfaced into the music world with a project band, Big Rig, and later with a more active band, Common Rider, which included bassist Mass Giorgini (of Screeching Weasel) and drummer Dan Lumley (of Squirtgun). Common Rider released two full-length albums and did some nationwide touring in the United States before eventually disbanding in 2003. Currently Jesse Michaels has teamed up with Morgan, Max, and Mike from The Hard Girls to form Classics of Love a melodic 1980's style punk band based out of Berkeley, California.