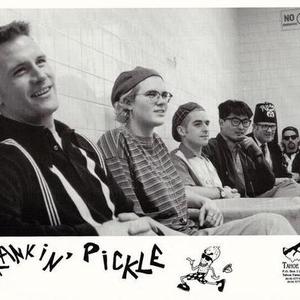 The band was unique in that all of the members had sung lead vocals on at least one recording and the songwriting responsibilities were distributed throughout, though Mike Park was generally regarded as the front man.

Skankin' Pickle's lyrics range from silly, in songs such as "Fakin' Jamaican" and "Asian Man", to sociopolitical, in songs like "Racist World" and "Ice Cube, Korea Wants a Word With You". As a band, Skankin' Pickle promoted racial equality in the tradition of two-tone ska bands, such as The Specials, in late 1970s England.

Following their breakup in 1996, Knackstedt and Nylander started another skacore band called 78 RPMs. Mike Park released an album and toured with The Bruce Lee Band, a side project consisting of Park and members of Less Than Jake. Later, Park started a short-lived, all-Asian ska band called The Chinkees. Lundquist went on to play trombone for Mu330.

Sing Along With Skankin' Pickle