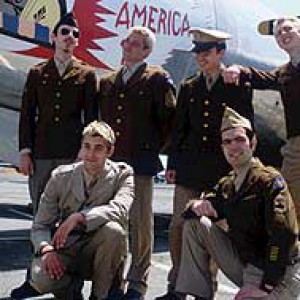 The W's were a Christian ska/swing band, formed in Corvallis, Oregon in 1997. Within a year, they had signed with Five Minute Walk. Success came quickly as they toured with bands such as dc Talk on their "Supernatural" tour. Within a year they had produced their first album, Fourth From the Last. The immediate success of this album put it at #4 on Billboard's Heatseekers chart. Their song "The Devil Is Bad" became their greatest hit.

The bands other hit song, "The Rumor Weed Song" was made for the children's video series VeggieTales (episode: "Larry-Boy and the Rumor Weed"). It was included as a hidden track on their second album Trouble With X.

This band's downfall came as quickly as its success had. Their final release, Trouble With X, came at the end of the Swing Revival movement. Swing music was losing its mass appeal, and The W's were caught in the mass exodus from the genre.

A third album had been planned but was never released. However, one song "Somewhere Between The Devil And The Deep Blue Sea" was released on the compilation Take Time To Listen volume 5.0 by Five Minute Walk. The song shows that the band was changing its sound toward rockabilly, but retaining the horn section.

Fourth From The Last