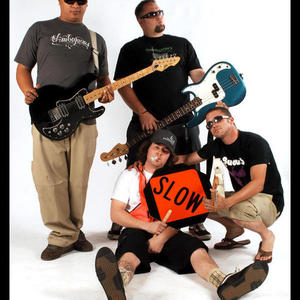 Heavily influenced by bands like Sublime and Pepper, B Foundation relies on syncopated reggae punk rhythms combined with Bradley-esque vocals to create something that is, if not new sounding, still greatly appreciated and necessary in picking up where Sublime left off. With the music industry saturated with guys wearing black, covering their faces with their hair, screaming at the top of their lungs, and making ballads at the same time, you might think to yourself, "Where the good vibes at?". The underground scene of reggae influenced rock bands continues to grow.

With the music industry saturated with guys wearing black, covering their faces with their hair, screaming at the top of their lungs, and making ballads at the same time, you might think to yourself, "Where the good vibes at?". The underground scene of reggae influenced rock bands continues to grow. Shows are packed, girls are dancing, party busses are getting filled, and the scene is evolving.

There have always been stand out bands of this genre throughout the years. Most people just relate this sound to the band Sublime. But others like The Police and The Clash also had phenomenal success and are also a huge influence in the music scene today. Eventually this rock/reggae scene started growing and growing, and now is undeniably one of the biggest live draws on the West Coast and around the nation. So many bands are having success and having a great time doing it.

The B FOUNDATION was formed in 2001 in Arcadia, CA with one thing in mind, taking over the world! With a few small changes over the last four years, the B FOUNDATION has found an awesome lineup and a well distinguished sound. The B FOUNDATION has played on many stages since 2001, from your backyard to sold out venues across the country. From city to city the shows are filled with good people who know how to have a good time. Lead guitarist Gyl Bonus (formerly of The Family Dog) has one the most unique guitar styles in the music business. His fast fingers set the tone and energy for every live performance and his riffs are unmatched. Singer/Guitarist Patrick Stevenson is one of the most charismatic people in Los Angeles. His vocal range is amazing and his guitar playing is the foundation of the foundation. Patrick has developed into an excellent songwriter and his personal "take on the world" vibe can be heard in THE B FOUNDATION songs. The rhythm section is solidified with Bassist Jason Moorehead and Drummer Ian McGrath. Together the two are seamless on stage and in the studio.

THE B FOUNDATION released their first full length in March of 2004, entitled "The Deep End". Beginning in February 2006 The Deep End became distributed internationally in Japan. THE B FOUNDATION has also licensed their music to many different companies over the years and has an extensive film credit history. The B Foundation has been apart of many successful compilation cds, including "The One Big Family" album. The B Foundation has also been touring in support for many national acts including: Slightly Stoopid, Pepper, Common Sense, Long Beach Shortbus (Members of Sublime and LBDA), Kottonmouth Kings, OPM, Voodoo Glow Skulls, Fishbone, ZebraHead, English Beat, Authority Zero, The Skeletones, Dubcat, Half Pint, Bargain Music and many more. THE B FOUNDATION has also been the headliner at The Bank of the West Beach Games Featuring the U.S. Open of Surfing the last two years.