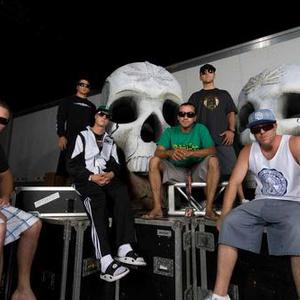 Slightly Stoopid was formed in 1995 in Ocean Beach, California by childhood friends Miles Doughty and Kyle McDonald. Soon after, Sublime frontman Bradley Nowell discovered the duo and asked them to perform a set at the Foot Hill Tavern in Long Beach, California. Nowell immediately signed them to his label, Skunk Records, while the band was still in high school. A pair of releases soon followed?1996's punk-tinged Slightly $toopid (featuring a guest appearance by Nowell on the song ?Prophet? ? later covered by Sublime and released on their box set, Everything Under the Sun) and 1998's surf-inspired The Longest Barrel Ride.

The group self-released 2001's Acoustic Roots: Live and Direct (a 40-minute acoustic set, captured live at San Diego 's Rock 105.3 radio station) ? the first for their own label, Stoopid Records, before issuing 2003's Everything You Need on Surfdog (a musical departure for the band, that sold more than 130,000 copies). After solidifying a new line-up with the additions of Ryan ?RyMo' Moran (drums), Oguer 'OG' Ocon (congas, percussion, harp, vocals) from the B Side Players, and C-Money (trumpet, keyboard) and Dela (saxophone) from John Brown's Body, the band began to mix even more different musical styles on 2005's Closer to the Sun. The album featured collaborations with well-known reggae names such as Barrington Levy and Scientist. Closer to the Sun impressively debuted in the Billboard Top 200 and sold nearly 25,000 copies in its first two months of release. A year later, Slightly Stoopid issued their first-ever electric live album, Winter Tour '05-'06 Live CD/DVD, as well as their first-ever DVD, ?'Live in San Diego'', while 2007 saw the release of the group's fifth studio effort, Chronchitis, which debuted at #55 on the Billboard 200, and #2 on the indie charts.

The group has toured frequently since its inception, including appearances arts festivals such as Coachella, Harmony, Lollapalooza, Austin City Limits, and New Orleans Jazz Fest. Additionally, the group has played sold-out shows in Australia, Japan, Guam, Portugal, Denmark, the UK, Germany, the Netherlands, and the Dominican Republic. ?Without [the fans], we'd just be playing at the bar,? admits Kyle. ?They make it worth our while ? when we go out and people are having that good of a time, the energy goes back and forth. Just a good time ? we rely on each other's energy.?

Slightly Stoopid has played with the Dave Matthews Band, Damian ?Jr. Gong? Marley and the Marley Brothers, Sublime, the Roots, The Expendables, Snoop Dogg, G. Love & Special Sauce, Ozomatli, Toots and the Maytals, and Pennywise, among others, as well as their first-ever sole headlining tour of amphitheaters in 2008, joined by their friends Pepper and Sly & Robbie featuring Cherine Anderson.

2008 saw the band issuing their first-ever ?odds and ends' collection, Slightly Not Stoned Enough to Eat Breakfast Yet Stoopid ? the group's newest release for their growing label, Stoopid Records (which will also feature releases by other groups, including the label's first signed act, The Expendables from Santa Cruz, California). Included on Slightly Not Stoned Enough to Eat Breakfast Yet Stoopid are outtakes from both the Closer to the Sun (including tracks that were previously issued as a limited edition bonus CD) and Chronchitis sessions, as well as a bevy of new material recorded at the famed Circle House Studios in Miami, Florida, and such cover tunes as UB40's ?I Would Do For You? and the traditional ?I Know You Rider? (most notably covered by The Grateful Dead). Also making their first appearance on a Slightly Stoopid studio album are newly recorded renditions of the long-time live standards ?False Rhythms? and ?Sinsemilla.?

Meanwhile... Back In The Lab

Top Of The World

Slightly Not Stoned Enough To Eat Breakfast Yet Stoopid

Closer To The Sun