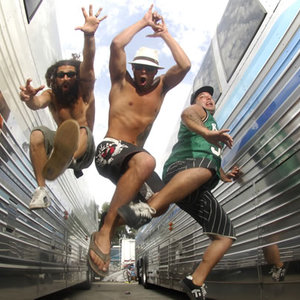 Pepper is a reggae, ska band formed in 1996 originally from Kailua-Kona, Hawaii, United States recently having moved to Southern California. They play a mix of reggae, dub, ska, and punk and are best known for their 2006 single "No Control" which was a Top 20 hit on the Billboard Modern Rock Tracks chart. Pepper's relocation was inspired by Volcom Entertainment's excitement and interest in producing and distributing the band's music.

Pepper's relocation was inspired by Volcom Entertainment's excitement and interest in producing and distributing the band's music. ?Give 'N It? is the band's first official release combining dancehall, reggae, punk, hip-hop, and pop. It sparked some initial interest in Warped Tour promoter Kevin Lyman. With Kevin's interest and Volcom's involvement Pepper graced the premiere side stage at Warped Tour 2001.

Immediately following a whirlwind of shows, Pepper took to the studio with Steve Kravac (Less Than Jake, MXPX) to create ground swell album ?Kona Town ?. Released in March of 2002, this album, with it's "signature sound" sold over 45,000 copies. This sophomore release by Pepper not only charted for several weeks on the DMA chart in their home state of Hawaii, but also yielded the #1 hit ?Give It Up? (aka Dirty Hot Sex) on Clear Channel affiliate Star 101.9 KUCD in June of 2003. KEDJ in Phoenix added the track in September of 2003 which instantly jumped into the TOP 10 ?call-out? (or most requested), and still receives recurrent airplay.

Concentrating on live performances and culminating rich and sincere relationships with each and every fan, Pepper continued to tour throughout 2003 and into 2004 which included dates with 311 and Snoop Dogg (with Pepper as main support) appearances at the annual Bob Marley Birthday celebration, San Diego's premiere Festival ?Street Scene?, some scattered headline club dates and a complete US tour with Slightly Stoopid. This Dub/rock power trio's fan base is not limited, as one would assume, to Southern California surf towns. They have sold out shows in Phoenix, Orlando, Jacksonville, New York, New Jersey, Colorado, Seattle, Eugene, Santa Cruz, Sacramento, and San Francisco.

In March of 2004, Pepper released ?In With The Old?, and it debuts at #35 on the Billboard Heat Seekers and #18 on the independent albums chart. The band relinquish their nostalgic sentiment in saying they named their album "In With The Old" as an ode to a time when music used to be collectively better, when bands such as Metallica, Cream, the Beatles, and Black Sabbath were still relevant. Recorded at 311's completely-analog Hive studios by legendary board master Ron St. Germain, the album showcases a broader range of influences shared by the trio. The new album contains everything from the countrified "Border Town", which features steel laptop playing from ex Doobie Brothers and Steely Dan alum, "Skunk" Baxter, the Heavy Metal leaning (and Andrew Blake porno inspired)"Keep Your Head Bangin", the 80's influenced first single "Ashes? evoking the likes of The Police and English Beat, and the solid reggae tinged rock of "Love Affair" and "Use Me" bringing back the spirit of both Bad Brains and Sublime.

Over the past few years Pepper has been able to hone their skills as songwriters and recording artists. As harder influences such as Nirvana, Black Sabbath, and Pantera are incorporated into their already well developed reggae-rock roots, Pepper is beginning to explore new ground stylistically. And as their fan base spreads, sales of ?In With The Old?, as well as the two previous albums, continue to increase. Pepper also began a record label of their own, LAW Records as a vehicle to promote music they believe in and love. The first official release was a re-release of their first album entitled ?Give-n- It?, a collaboration with CornerstoneRAS. The second is aptly named ?Afta Party? and features tracks by a group of MC's from their hometown of Kailua-Kona , Hawaii as well as a few guest appearances by PEPPER. Be on the look out for future releases from LAW Records, as this is just the beginning!

September 24 and 25, 2004 Pepper performed back to back sold out nights at the famed Hollywood Troubadour. A live DVD of these performances is slated for release February 15, 2005. In December of 2004 Pepper will support the Kottonmouth Kings on a Midwestern city tour, which will end in Salt Lake City , Utah ; but not before a ?Garage Session? at KTCL in Denver which the band has been invited on, and will perform for a select audience at the station on December 21, 2004 .

As the year draws to a close Pepper heads ?Back Home? for a string of SOLD OUT shows on the Islands . Pepper will play their first headlining Arena performance on New Years Eve 2004 at the Blaisdell Arena in Honolulu , Hawaii .The year to come is already promising to be nothing less than amazing, with a National headlining tour in place for January running through March, including the 3rd annual Kona Town Music Festival on December 17th in Kaula-Kona,Hawaii,as well as many International endeavors on the rise!

Pepper has just taken to the road for yet another tour, with 311 and the orignal members of The Wailers (Bob Marley's band), that will last through the summer of 2006. The tour has started in California and will move throughout the states including stops scheduled for Nevada, Illinois, Oregon, Idaho and Florida.

The band is currently working on a new album to be released in 2006.