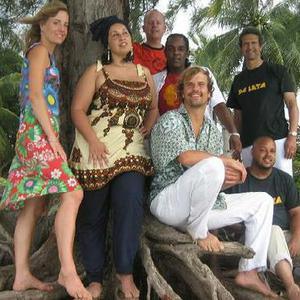 Da Lata was originally founded by musician and producer Chris Franck and DJ Patrick Forge in the summer of 1996. The idea for the project was to blend afro-brazilian influences with modern dance sensibility incorporating both acoustic and electronic elements in the music. Early experimentation came in the form of remixes rather than original material which proved to be a great way of honing the sound and at the same time gave exposure to the name.

Early experimentation came in the form of remixes rather than original material which proved to be a great way of honing the sound and at the same time gave exposure to the name.

Hooking up with Lee Hamblin (a man who had all the right technical skills and studio experience), Da Lata recorded their first original track - 'Deep Water' for UFO's Brownswood label in Japan. This was followed by a string of remixes for artists as diverse as Ruby, Sly And Robbie, Galliano and Carlinhos Brown.


In the spring of 1997 Da Lata released the highly successful version of the Edu Lobo classic 'Ponteio' on Jo Davis' Far Out label featuring Brazilian vocalist Liliana Chachian. The tune filtered over to NY and Dj's such as Francois Kevorkian and Joe Claussel made it massive at the now legendary 'Body and Soul' club.

The response to the record was extremely positive worldwide, with all the right people making the right kind of noises, it was hailed as both 'ground-breaking' and 'classic'. Dj's such as Gilles Peterson, Phil Asher, Rainer Truby, Gerry Lyseight, Shuya Okino were all championing Da Lata's music.

Early 1998 the path was set for Da Lata to start recording the debut album ? Songs from the Tin (released on Palm Pictures, signed by Trevor Wyatt). Although there had previously been a lot of experimentation with the blend of acoustic and electronic elements in Da Lata's music, the debut album leans more towards a 'fat' organic sound rather than relying too much on programming. The result being a record which still sounds contemporary yet somehow timeless. The song 'Pra Manha' became an anthem for Dj's all around the world.

Songs from the Tin features Liliana Chachian on vocals and percussionist Oli Savill (both also contributed to writing on various tracks). The album also includes the involvement of great musicians such as trombonist Dennis Rollins, percussion by Carl Smith, saxophone by Nathan Haines, drums by Tristan Banks and additional vocals by Nina Miranda and Deidre Dubois. The album was recorded and engineered by Toni Economides who's technical skills were able to realise the vision for this first album.

Due to the warm welcome which the album received Da Lata were able to promote the record by going on the road with a 7 piece live band. From 2001-2003 Da Lata toured Europe, Japan and the United States and performed at many major festivals around the world such as 'North Sea Jazz' (Cape Town and Netherlands), New York 'Summer Stage', 'Heineken Festival' (Beijing, China), Roskilde, Womad (United Kingdom and Canary Islands).

Remix work for Da Lata has always carried on alongside touring and writing original material. Late 2002 early 2003 Da Lata released a collection of some of their remix work on the album entitled Da Lata Remixes (Palm Pictures). This collection represents the evolution of the Da Lata sound in the context of the remix. As it was the case in the beginning , remixes have continued to be a major part of the way in which Da Lata have expressed their creativity especially in a dance music environment. The album includes amongst others remixes done for Femi Kuti , Bebel Gilberto, Arto Lindsay, Luciano, Sly And Robbie, Ekova and also features an original track 'Golden' which was released as a single featuring Chico Cesar and accordionist Marcelo Jeneci da Silva.

This is an album which defies easy categorization. Eventhough the album includes a wide range of influences, it's very much London's unique musical culture that defines them as much as anything i.e broken beat, brazilian, r n'b, afrobeat, it's all there. The album features a fantastic cast of contributors, names both new and familiar, including the incredible voices of Jhelisa Anderson, Nina Miranda, Courtney Denni, Bembe Segue, Baaba Maal and Pedro Martins, as well as some wonderful work from guest musicians such as Paul Aguilera, Marcelo Jeneci da Silva, Davide Giovannini, Dennis Rollins and Mike Patto. Once again the album was recorded and engineered by Toni Economides whose skills and creativity have helped to enhance the sound of the album in many ways. The title track 'Serious' became another classic Da Lata "floor filler" for Dj's around the world.

Since releasing the album at the end of 2003, Da Lata have again toured around the world with a 7 piece band to promote the record. Europe, USA, and Japan have been the main areas of touring and festival highlights include Glastonbury, Coachella Festival (California), Festival of World Cultres (Dublin, Ireland), Nu Jazz festival (St. Petersburg, Russian Federation), Koh Samui music festival (Thailand).

Da Lata are currently writing new material, remixing for other artists and touring with the band.

Songs from the Tin