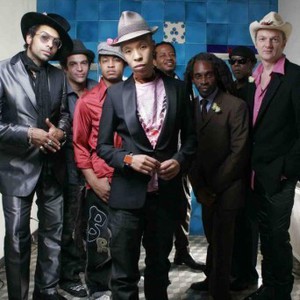 In the mid-1990s the group became a staple of the New York City club scene. Their debut album "Cool and Steady and Easy" (1994) scored an underground hit with the rendition of Pharoah Sanders's "The Creator Has a Master Plan". "Cool and Steady and Easy" (1994) also featured prominent guests like Maceo Parker, The Tower Of Power Horns, Michigan & Smiley and even Dizzy Gilespie.

The album, "In The Buzz Bag"(1998), included Turkish folk music rythms and instruments, recorded with the Turkish band, La?o Tayfa. In The BuzzBag became a milestone in collaborative projects and earned BFE a Grammy nomination. It also escalated the group to a stadium capacity act in Turkey.

In 2000, BFE released their third album "Make Them Like It", which concluded where the first album left off: a happy m?lange of funk, Latin, reggae, jazz, house, dub, electro and hip hop which featured the fan favorites ?I Got Cash', ?Mambo Con Dance Hall' and ?Woman Thing'.

After the 2001 world tour the band members took a hiatus and pursued a number of noted solo interests.

Offers of recording and touring where plentiful, and BFE songs kept being featured on compilation albums around the world, and in the summer of 2006, a core of BFE members got back together again to do a tour of three world continents as BFE Sound System (mixing classic BFE with electro and dub). By the end of 2006, the sound system model had been abandoned for a return to the group's original all live funk line up consisting of Hanifah Walidah, Papa Dee and Everton Sylvester (vocals), Lati Kronlund (bass), Yancy Drew (drums & vocals), Desmond Foster (vocals & guitar), Iwan van Hetten (trumpet, keys & vocals) and Philippe Monrose (percussion). The group continued touring the world in 2007.

In the spring of 2008 the band released a new album ?Watcha Playin'. The songs on the album have been written and developed during the band's tours in front of audiences around the world, and it has been recorded in studios in New York, Paris, Amsterdam, Istanbul and Stockholm.

Cool And Steady And Easy