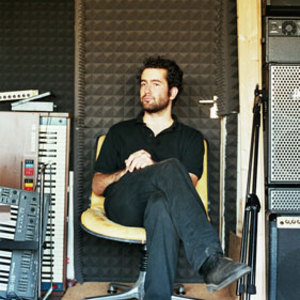 27 year old Niko Schabel was brought to our attention by Quantic. ?Have a listen, you might like this,? he said handing over a CD-r to Ubiquity A+R rep Andrew Jervis after a gig in San Francisco. He was right. Schabel hails from Berlin and, thanks to Quantic, now records for Ubiquity as Radio Citizen. His sound ranges from slack dub, moody folksy-soul, to adrenalin infused and spiritual cinematic jazz.

The sound of Radio Citizen comes from Schabels ability to loosely glue together a collage of sampled textures which are embellished with gifted musicians and often topped-off with the seductive vocals of the worldly Bajka. It sounds complicated, but the end result is actually very simple and addictive.

Schabel is the main force behind Radio Citizen and in addition to the sampler and mixing desk he plays alto saxophone, clarinet and bass clarinet, kalimba and small percussion, plus rhodes, flute and synthesiser. He is regularly assisted by vocalist Bajka and flute and sax man Wolfi. Bajka was born in an Indian temple and grew up in Afghanistan, Nepal, Pakistan and on a catamaran in South Africa. She has traveled the world with a music commune called Embryo that her uncle founded and father was a member of, and which coincidentally Schabel was also a latter day guest. Bajka has recorded with Compost act Beanfield and released solo records on the Jazzman label. In addition Schabel has played and performed with the Niko Schabel Quartet, the Express Brass Band, the Poets of Rhythm, Jojo Kuo (ex-Fela Kuti), Nik McCarthy (Franz Ferdinand), the Last Poets, and many more.

Schabel chose the name Radio Citizen because it allows for a wide range of musical connotations. He also read and was influenced by the Rem Kohlhaas book ?Delirious New York? which is about Radio City Music Hall. Completing the circle, Radio Citizen music is being used in a German documentary about Berlins famous communication towers and is providing stills from the documentary for the album artwork. Schabel is currently sorting through about 30 tracks to pick the best selection for the Radio Citizen album. ?I have a about 50 CDs worth of material recorded over my various projects!? remarks Schabel. ?I'd like my album to fulfill some unkept promises of the 1990s. For me, many ideas didn't reach their full potential and we entered a period of boring programming, lounge-overkill, and bad acid-jazz,? he adds. Schabels influences are wide and deep. ?I think Radio Citizen has shades of my love for sixties jazz, funk 45s, soul, dub and reggae, hiphop, afrobeat, electronica, trippy stuff, d&b, early eighties avantgarde, surf, the old school, the new school, Arabian music, Latin, boogaloo, rocksteady, whatever,? rolls out Schabel. ?But the artist I admire most is John Coltrane. I probably have about 30 of his albums.?

The Night & The City