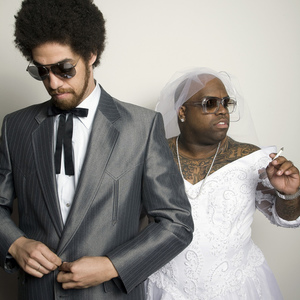 Gnarls Barkley is an alternative/soul group which formed in 2003 in Atlanta, Georgia, United States. The group consists of Cee Lo Green (vocals) and Brian "Danger Mouse" Burton (multiple instruments). The group is best known for the international smash hit "Crazy". "Crazy" - which was their first single - debuted at #1 on the British pop charts on April 2, 2006. It was the first #1 UK single to be obtained solely through Internet downloads.

"Crazy" - which was their first single - debuted at #1 on the British pop charts on April 2, 2006. It was the first #1 UK single to be obtained solely through Internet downloads. The success of the single in the UK was due largely to its use in a promotional trailer for Radio 1 across all of the BBC TV channels prior to the single's release. 'Crazy' stayed at #1 for almost 9 weeks.

The buzz for "Crazy" helped generate a lot of press coverage of their debut album, St. Elsewhere, which was released on May 9, 2006.

The album is seen as a cross-over between hip-hop, rock and soul. Both artists have previously been known to have a quirky experimental side, moving between different genres of music.

Producer DJ Danger Mouse began his career doing remixes of indie rock artists like Neutral Milk Hotel and downbeat instrumental music under the 'Pelican City' alias. He later went on to emphasize more hip-hop production: most notably his The Grey Album, a remix of Black Album, with samples exclusively from The White Album; 2005's DANGERDOOM collaboration with MF DOOM; and, most recently, the double platinum Demon Days.