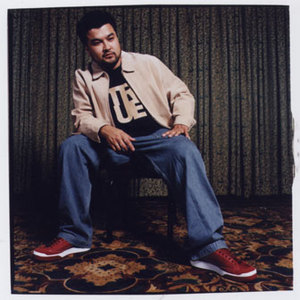 Lyrics Born (a.k.a. Asia Born) is Tom Shimura (b. 1972), originally from Berkeley, California, though through his childhood he lived in Tokyo, Japan, and Salt Lake City, Utah. He began his hip hop career while at college at UC Davis, where he was a DJ at the college station KDVS. He is a founding member of the group of artists known as Quannum Projects. He is also one half of the group Latyrx with fellow MC Lateef The Truth Speaker.

He is also one half of the group Latyrx with fellow MC Lateef The Truth Speaker. Lyrics Born has worked with many artists including KRS-One, Jean Grae, Dilated Peoples, Z-Trip, DJ Shadow, Diverse, Tommy Guerrero, Blackalicious and his wife, Joyo Velarde.

In April of 2005, Lyrics Born's second album Same !@#$ Different Day was released on the Quannum Projects label. The album featured remixes of five songs from Later That Day along with a number of new tracks.

LB's hit song Callin' Out was featured in a 2004 Coca Cola television commercial in the United States featuring actor Adrien Brody and was #1 on San Francisco's Alternative Rock station, Live105 for 5 weeks. The song is also featured in the film Waiting... starring Ryan Reynolds.

His songs have been featured in television shows such as HBO's Entourage, Six Feet Under, Skins, Gilmore Girls and the films Collateral by Michael Mann and Fast and the Furious 3: Tokyo Drift. Lyrics Born also appears in the upcoming Justin Lin film, Finishing the Game.

His latest album, Overnite Encore: Lyrics Born LIVE! is a live record recorded in Australia and has received praise from critics all across the board who have hailed it as one of the best live hip-hop albums ever made. Rolling Stone gave the album 3.5 / 4 Stars.

Lyrics Born is currently recording his latest album which is due for release next year.

You can check out updates via his online video blog, LBTV available on his website and Myspace page.