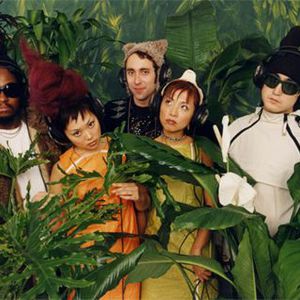 Cibo Matto is a New York City-based band formed by two Japanese women, Miho Hatori and Yuka Honda in 1994. Despite being based in the US rather than Japan, they have strong links with the shibuya-kei scene in their use of sampling and mixture of trip-hop and rock, but stand out amongst other such artist for their particularly strong use of Latin and South American music. Cibo Matto is an Italian phrase that means "crazy food".

After working together in the noise rock band Leitoh Lychee, Miho Hatori and Yuka Honda formed Cibo Matto around 1994. While recording tracks for their first album, VIVA! La Woman, they collaborated with the Jon Spencer Blues Explosion's Russell Simmons and others, on a side project called Butter 08. The album was released in 1996.

They later enlisted band members Sean Lennon, Timo Ellis and Duma Love to help record their Super Relax EP and final full-length album, Stereo Type A. While Viva! La Woman had strong hip-hop and trip-hop elements, Stereo Type A leaned more more towards their rock, pop and Latin side. The group continued to play live concerts until disbanding near the end of 2001. Yuka Honda went on to release solo albums and continued to collaborate with Sean, while Miho Hatori moved onto bossa nova, teaming up with guitarist Smokey Hormel to form Smokey & Miho, then joining Gorillaz for their self-titled first album and eventually releasing her own solo album.

In 1997, the band guest-performed on the television show Buffy the Vampire Slayer's second season premiere in the fictional club The Bronze, performing "Spoon" and "Sugar Water".

Since the break-up in 2001, their songs have been played in many different places, including the video game Jet Set Radio Future. "Birthday Cake" was featured in the Kids in the Hall's feature-length film, Brain Candy.

The band announced their reunion on March 18, 2011, to perform as part of a benefit concert for victims of the 2011 T?hoku earthquake and tsunami. The concert, which took place on March 27 at Columbia University in New York City also included Yoko Ono, John Zorn, Sonic Youth, and Mike Patton, among others. Following on the success of this show, a second was added, this time featuring the Plastic Ono Band and Patti Smith along with Cibo Matto. They've since performed at the Hollywood Bowl on June 26 in another benefit with Yellow Magic Orchestra. Cibo Matto then went on their formal US reunion tour titled "Yeah Basically Cibo Matto." The tour's first part was from June 21 to June 26 at the Hollywood Bowl and the second part was July 12 to July 20 with stops in NYC, Chicago, Toronto, Washington, D.C. and Boston.