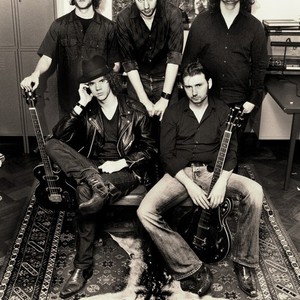 ?De Staat at Stealth which was probably the highlight of my day. The Dutch five-piece are a garage rock band that thrashed their way through the set with head banging and epic guitar solos similar to Queens Of The Stone Age. Then infuse cheekiness with humour and you have a great band in the making. Think the energy of Eagles Of Death Metal and The Hives with a mix of noise rock, and you have a band who know they're bloody good but can have fun with it too. Then add a cowbell and a theremin and you have my new favourite band.?
(www.leftlion.co.uk)

The story of De Staat proves that humble beginnings can lead to great things. It all started as a one man project by the Dutch singer, musician and composer Torre Florim. As a graduating project from his studies ?Music Production' he wrote, played and produced the stunning debut album ?Wait For Evolution'. Though before it was even released, De Staat was already a full grown band. Since then ? early 2009 ? the band established itself as the most exciting new rock band that Holland had to offer in a very long time. Their concerts got unanimous rave reviews. Their stage reputation grew so fast that within a year the band played festivals from the likes of Sziget, Pinkpop, Lowlands, Dour and took on the acclaimed John Peel Stage at Glastonbury.

It all happened very fast. When ?Wait For Evolution' came out, De Staat had already laid a healthy foundation with truly mesmerizing live shows. Belgium band, dEUS took them on a UK tour and shortly afterwards De Staat was invited to play on major Dutch and Belgium festivals and venues, again to great responses. During the Lowlands gig in the Summer of ?09 no one other than Chris Goss (Masters of Reality, producer Queens Of The Stone Age) was watching the band and liked what he saw. He introduced them to Mascot Records who signed them in a heartbeat and released ?Wait For Evolution' internationally in the Spring of 2010. It turned out Holland wasn't the only one adoring the band, also internationally the album was greeted with euphoric reviews. That year the band spend a lot of time on the road; sharing a stage with Iggy Pop in Toronto, playing to thousands of people in the beautiful valley of Glastonbury, opening for The Stranglers in the legendary ?Le Bataclan' in Paris, doing small showcases in Lower East Manhattan or Berlin, just the kind of jazz they love. And they could use a change of scenery, new people, new music and a new audience because it gave lead singer and songwriter Torre Florim all the more inspiration for the follow-up of ?Wait for Evolution': ?Machinery?

When De Staat went to record ?Machinery', this time with a full band in tow, the options were much bigger. The challenge was to define the sound through the contributions and interaction of each member of the band. Not only would the album be a team effort instead of Torre recording by himself at home, with nothing more than two cheap mics, one dusty old laptop and one beginners guitar (the one's that come with a small amp and a bag included). They also have some expectations to live up to, they have to prove all the fuss around them was well-deserved. Fortunately ?Machinery' meets all those expectations. The album is described by the band as a "gut-inducing slab of psycho funk." It's a dark sonic adventure that takes the listener through underground caves of blues, funk and electro where halal butchers, serial killers, whistleblowers, rats and sweat-covered bodybuilders cross paths.

Influences & Inspiration
The musical influences on ?Machinery' are best experienced through the sound. First impressions cite the rhythms and soundscapes of minimal music-composer Steve Reich, combined with the raw analogue sound of garage rockers Dead Weather.
Florim says: "What Jack White does with Dead Weather sound really cool, and that's what I wanted as well. It's the old school approach. At the same time I really like using samplers and synthesizers. That's where Steve Reich kicks in. He uses a lot of instruments to create one sound. That's what we tried to do on this album as well, but only in pop terms. It makes for a strange combination - record in an old school manner with a new school manner of writing. It works for De Staat."

When the band was formed in 2006, and started playing concerts, the songs Torre wrote by himself developed into something real and that's when De Staat turned into an amazing live band. It's that live vibe that De Staat has reproduced on ?Machinery'.
"I often hear we sound like a machine when we play live," says lead singer and songwriter Torre Florim. "I thought it would be fun to expand on that on this record and emphasise the mechanical elements in the music." Florim continues "We played a lot of rhythms, and also created crazy sounds with the guitars. I didn't want to exclusively focus on the rhythmic parts, but instead wanted to change the way we approached the tools of a conventional rock band setup. During the process of writing and creating the music, the album developed an industrial flavour that reminded us of a machine."
You can hear the tension of the band playing together."

?De Staat have the rattly, locomotive energy of The Hives of The Monks, with a home-tooled funkiness all of their own? ? Word Magazine? (UK)
"You must do something fucking spectacular if you want me to grade you with the perfect game... Well, DE STAAT - well done." - Subba-Cultcha (UK)
?Consistently tuneful and admirably adventurous.? ? The Guardian (UK)
?De Staat are the discovery of Bristol's Dot to Dot festival? ? efestivals.co.uk (UK)
?Absolutely brilliant? - Music-dash.co.uk (UK)
?Tight as hell? ? citylifers.co.uk (UK)