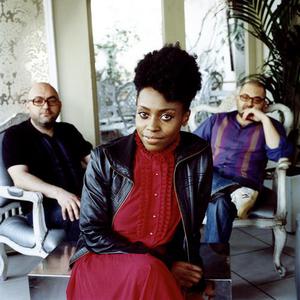 Morcheeba are a British band that mixes influences from rock, trip hop, rhythm and blues and pop. The word "morcheeba" means "the way of marijuana" ("MOR" - the middle of the road & "Cheeba" - informal name for cannabis). Formed in 1995, they consisted of Paul Godfrey (dj), Ross Godfrey on guitar and keyboards with Skye Edwards as the primary vocalist fronting the band. While churning up interest through an underground presence mostly in London, the band finally broke through when featured on the Ultra-Chilled series.

Formed in 1995, they consisted of Paul Godfrey (dj), Ross Godfrey on guitar and keyboards with Skye Edwards as the primary vocalist fronting the band. While churning up interest through an underground presence mostly in London, the band finally broke through when featured on the Ultra-Chilled series.

Their first two releases seemed to portend a trip-hop based modern psychedelia that they seemed to completely eschew for a meatier, beatier, mom pop-centric sound on 2000's Fragments of Freedom. This completely confounded some fans and critics who immediately wrote them off -- many of whom would later return and eat their words. The band took another big turn in 2005 with The Antidote.

Daisy Martey (formerly of the band noonday underground) joined in 2005 to succeed Skye Edwards. In 2003 the Godfrey brothers made the decision to part with Skye and asked her to leave Morcheeba, she went on to pursue a solo career. However, as Skye Edwards and her voice had become a very integral part of the Morcheeba sound in the minds of many of the band's fans, the rather abrupt switch to a new lead singer had met with mixed reactions, including criticisms that the "new" Morcheeba was no longer as electrifying in person. Perhaps because of this, the Godfrey brothers replaced Daisy with yet another singer - Jody Sternberg - for their live performances.

There was some speculation that Daisy has been dropped completely as lead singer, particularly seeing as Daisy Martey is currently suing Paul Godfrey for sexual harassment, with the band taking on a direction akin to that of Zero 7; another electronica group who rely not on any single lead person but a rotating and ostensibly more flexible assortment of vocalists.

On February 12 2010, New Musical Express revealed that Skye Edwards was once again working with the band. Edwards was due to make her live return with the band at the Caprices Festival, Switzerland on April 9 2010.[1] Paul Godfrey confirmed the news of Edwards' return in the blog section of Morcheeba's MySpace page on February 13 2010.[2]

Morcheeba have completed their seventh album "Blood Like Lemonade" due for release on PIAS in June 2010.

Get Mashed! (With Kool DJ Klear)

Parts Of The Process