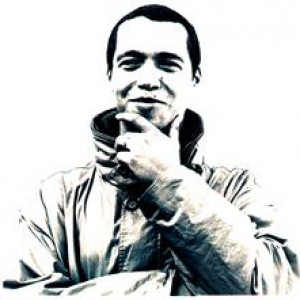 Finley Quaye (born 25 March 1974, Edinburgh, Scotland) is a British musician. He won the 1997 Mobo Award for best reggae act, and the 1998 BRIT Award for Best British Male Solo Artist. Quaye is the youngest son of jazz musician Cab Kaye, the half-brother of guitarist Caleb Quaye, and brother of jazz musician Terri Quaye. Quaye made his recording debut in 1995 on A Guy Called Gerald's "Finley's Rainbow".

Quaye made his recording debut in 1995 on A Guy Called Gerald's "Finley's Rainbow". He scored a solo deal with Epic Records, and, in late 1997, hit the UK Top 20 twice with "Sunday Shining", a loose Bob Marley cover, and "Even After All". His reputation was established by Maverick A Strike, an adventurous but accessible album released in September 1997, which sold gold less than three weeks later and led directly to the Brit Award victory.

In 2004 the song "Dice", in collaboration with William Orbit, and featuring Beth Orton was a minor hit, helped in part by its inclusion on The O.C. soundtrack.

The Best Of The Epic Years

Much More Than Much Love

Much More That Much Love

It's Great When We're Together (EP)