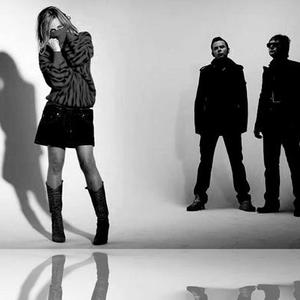 Hooverphonic is a Belgian rock/pop group formed in 1995. Though initially placed in the trip-hop genre, they quickly expanded their sound to the point where they could no longer be classified so easily. The band originally called themselves Hoover but later changed their name to Hooverphonic due to other groups using the Hoover name. The band achieved international recognition through the inclusion of the track 2Wicky (from A New Stereophonic Sound Spectacular) on the soundtrack to Bernardo Bertolucci's 1996 film Stealing Beauty (Io Ballo da Sola).

The band achieved international recognition through the inclusion of the track 2Wicky (from A New Stereophonic Sound Spectacular) on the soundtrack to Bernardo Bertolucci's 1996 film Stealing Beauty (Io Ballo da Sola).

The original members of the group were vocalist Liesje Sadonius, keyboardist Frank Duch?ne, bass guitarist and programmer Alex Callier, and guitarist Raymond Geerts. Sadonius left Hooverphonic on amicable terms shortly after the release of A New Stereophonic Sound Spectacular and was replaced by Geike Arnaert in early 1998. Duch?ne left the band after Blue Wonder Power Milk. Arnaert left the band in 2008 and was succeeded by No?mie Wolfs.

Hooverphonic released their fifth studio album No More Sweet Music in November 2005, featuring four singles: Wake Up, You Hurt Me, Dirty Lenses and We All Float. One year later they released a Best Of album called Singles 96-06. This was their latest release under the Sony label.

Hooverphonic released their latest album The President Of The LSD Golf Club on 8th October 2007 in Sint-Niklaas, Belgium and Holland, which includes the single Expedition Impossible. European Release January 2008 (although available via mail-order). This was an independent release, recorded at the Willie Nelson studios in the USA. At the time of writing, it isn't known if it was also released in North America. Let us know if you can confirm this?

On October 10th 2008, the management announced that Geike Arnaert would be leaving the band.

After Geike Arnaert and the band had parted ways, it took them two years to find a worthy successor to Arnaert. In November 2010 Noemie Wolfs was announced as the new leading lady. A brand new album called "The Night Before" followed soon after. The new singer was introduced on Belgian television in State Broadcaster VRT's late night show "De Laatste Show" on Thursday November 4th. The title track of the album is their biggest singles' chart success to date. Also, the album soon equaled the success of "A Magnificent Tree". Many fans liked the return to the original "Hooverphonic" sound and it seems No?mie Wolfs has effortlessly taken their harts as well.

The Best Of Hooverphonic