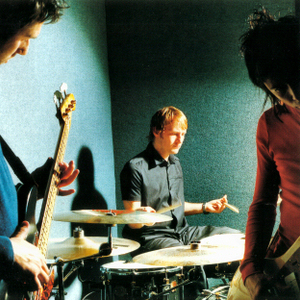 Sneaker Pimps were a downtempo/trip-hop band which formed in Hartlepool, England in 1995. The band best known for their first album Becoming X released in 1996, and particularly its highest charting single "6 Underground". As line of flight and Frisk, DJs and childhood friends Chris Corner and Liam Howe (from Middlesbrough and Hartlepool in the NE of England) released two EPs: "Soul of Indiscretion" and "World as A Cone" in the early 1990s.

While not nearly as complex as the song-based material they would produce, these bedroom-recorded mixes of sampled beats and folk sounds would form the blueprint for the later sound.

While at art college in Reading, Liam met David Westlake and Joe Wilson, who would both contribute to the first album and join the band on tour. When Frisk performed a gig with this line-up they later recorded some demos with Chris singing - these were considered the next stage in the evolution of Chis and Liam's professional partnership; another in an ever-improving set of smaller projects intended for a few thousand records at most. Drafting in Ian Pickering in 1995 to help with lyrics, they recruited Kelli Dayton (aka Kelli Ali) for vocal duties after seeing her singing in a pub in Reading. The name 'Sneaker Pimps' itself was taken from a Beastie Boys article about a man they hired to track down classic shoes.

The first single Roll On preceded the first album, followed by Spin Spin Sugar, Post-Modern Sleaze, 6 Underground and Tesko Suicide. The album contains a myriad of 90s pop-culture references (such as film Thelma and Louise) coupled to dark double entendres and puns on drug taking and suicide. It was wildly successful everywhere: in America it remains their only real stateside hit. In 2005, the song "Post-Modern Sleaze" (from the Becoming X album) was used as the theme song for Matroesjka's, an acclaimed Flemish drama series about Eastern European prostitutes and Belgians involved in the related sex trade.

Becoming X was "toured to death" over two years, particularly in America where the toll on Chris led to mental instability chronicled in the song Low Five. Coupled with Kelli's increasingly annoying behaviour, the feeling that demos for second album fit Corner's voice better, and the fear of being identified with the fad for trip-hop acts, Kelli was asked to leave the group and Corner became the singer. Dayton's departure, while lamented by many, was well received by critics who felt that it gave the band a more honest, emotional timbre and a more uniquely identifiable sound, especially with regard to the rawer and more personal quality of the lyrics. The Line of Flight studio was moved from Hartlepool to London and production on the next album started immediately.

1999's Splinter features the back of Chris' head, symbolizing the break with Kelli and his not feeling up to the responsibility of being a 'front man'. The album's production retains the sampled style of Becoming X while being edgier, less beat-driven, and at times more psychedelic. Due to wrangles with their record label, the album was self-released on their own Clean Up label and not released in the US. Without significant promotion, and the lack of obvious singles that Becoming X had shown, the album was not as successful, but the favourable critical response led the band to set up their own club night in London. Called 'Home Taping' and hosted at the [venue]ICA[/venue], it invited celebrities and musicians to submit their own cassette mixes for the night's entertainment, and the odd live set by the band. Allegedly, one was even received by Madonna.

For 2002's Bloodsport, the band decamped to France and Germany, recording in a farmhouse while capturing the trans-European essence of Berlinesque "new-wave punk". Liam Howe was unavailable, so long-term associate and friend Chris Tate was brought in for synthesizer duties. The album was a glossier affair than before and included Flood on production duties rather than the band. On Bloodsport's release (including this time the US) the album flopped, but made the Austrian top twenty. Its singles were more successful in both the UK and Europe.

Many fans feel that the songs on Sneaker Pimps albums post-Kelli, Splinter and Bloodsport, have lost the sometimes creepy bubblegum feel and have gained an emotional intensity, while some enjoyed Dayton's vocals precisely because of that detached style. Splinter and Bloodsport were most popular in Europe, with singles Low Five and Sick doing well in Poland, Austria, Germany and other countries.


The band's current status is not known: the last official statement came at the close of the "Give It Another Angle" competition in 2005, where fans remixed an unused 'Becoming X'-era track for inclusion onto a DVD of videos, 'Bloodsport'-era live footage, B-sides, remixes and rarities including covers of The Chauffeur and Firestarter. However it is unclear whether it will ever be released; the original 2004 date slipped to "before Christmas 2007", which as of December 2008 looks decidedly unlikely.

The band recorded demos, previewed live in Russia and on European radio in 2003 for an unknown movie soundtrack and a fourth album tentatively titled 'Recall', but otherwise simply known as SP4. One track (later known as 1 method) became the background loop on sneakerpimps.com. The album was never released; Chris and Liam purportedly shelved the tracks as a Sneaker Pimps album for several reasons. One, they contained some very emotional songs penned by Corner that were felt to be more suitable for a solo project, and two, in some cases were simply not being good enough to be released. Many of these tracks have been rereleased as IAMX material on 2004's Kiss and Swallow and 2006's The Alternative. IAMX and Chris Corner have recorded a new album for release in 2009 but it is not known if any more of these songs have been appropriated. The complete demos were leaked on the official sneakerpimps.be forum - songs that were not later used as IAMX songs include First & Careless Rapture, 1 method, Lolita, Ma Fille Concrete, Deviate and Tigers.

To refresh their minds and attempt to make better material, the band returned to Becoming X and Splinter, going back to the original tapes to remaster them to 5.1 surround sound. Splinter would also be revocalled by Corner to complement his stronger voice. However, this project was delayed along with the DVD and it is again not clear whether they will be released.

The band then recruited a new female singer and began work on a proper fifth album. The official website was updated to include images of a butterfly metamorphosing and a then unknown riff from a new song, but despite the exhortations to stay tuned no further news appeared. In late 2006, it emerged that seven demos for SP5 had been found and leaked from a portable music player left in a Russian bar, believed to be Chris's. The demos, including "Rush", "Samaritan", "Sun Ate The Moon", "The Shutdown" and riff source "Satellite" are all vocalled by the new singer, and show a lighter poppier sound than ever before - described by some fans on the forums as the "hangover" to Splinter's brooding trip and Bloodsport's excessive partying. As with other recent developments the band have not yet commented on the leak of the songs.

IAMX's single Think of England re-iterate's Chris's fears of returning to the hectic and self-destructive side of England (and London)'s dark underbelly, making a new Sneaker Pimps record based in the UK look near impossible. Even the name "Sneaker Pimps" is no longer protected: since 2003, its original use has been reappropriated and is now best known as a touring show of more than 500 rare shoes, particularly around North America.

With all Sneaker Pimps members working on new projects - for instance, Joe Wilson is now Director of Studies in Pop Music at the University of Gloucestershire, and Liam heads a film company - monetary/time pressures are in abundance. It looks increasingly unlikely whether 2009 will see the promised new record.