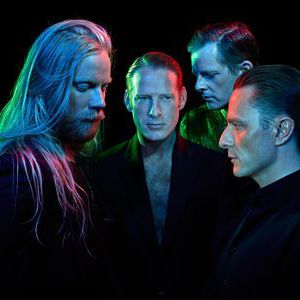 GusGus, Iceland's leading techno-/soul band saw the light of day for the first time in 1995, during a break in the making of the shortcut "Pleasure". Initially GusGus was as a multimedia collective that combined sexually tinged dance music with visual arts and shorts made by the group's members. A self-titled debut album appeared on their Kj?l & Anderson imprint in conjunction with the screening of "Pleasure" and immediately caused a buzz on the scene in their native land.

A self-titled debut album appeared on their Kj?l & Anderson imprint in conjunction with the screening of "Pleasure" and immediately caused a buzz on the scene in their native land. Eventually it's euphoric grooves and sensual beats reached the demanding ears of UK's 4AD Records that signed the band in 1996. By and since the release of their 4AD debut and second album "Polydistortion" the collective started touring relentlessly to a wide acclaim that has been enforced to this day.

They released their sixth album, Forever, in February/March 2007. Gus Gus has had a varied lineup, including:

Several lineup changes have occurred, and their current incarnation consists of three members (President Bongo, Earth and Biggi Veira). After their third album, This Is Normal, the filmmaking arm of Gus Gus (Kjartansson and ?rni ?orgeirsson) split off to form the production company Celebrator, now known as Arni & Kinski, which has produced award-winning advertisements and videos.[citation needed] A few former members such as Hafd?s Huld, Blake, and Dan?el ?g?st have gone solo, most notably though Emil?ana Torrini, who provided a song for the soundtrack to Peter Jackson's The Lord of the Rings: The Two Towers.

Gus Gus's music is eclectic, and although primarily classified with techno, trip-hop and house music, they have experimented with numerous other styles. They have also remixed several famous artists, including Bj&ouml;rk, Depeche Mode, Moloko, and Sigur R&oacute;s. Added to this they released the song Desire with Ian Brown in January 2004.