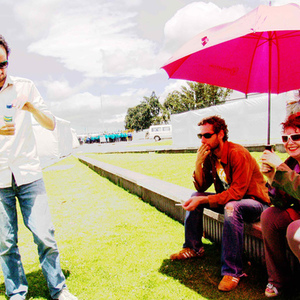 T?l?popmusik is a French electronic music group with three members. The group's first album was Genetic World, and several singles from the album have been released since. The group's second album, Angel Milk was released in 2005. According to Telepopmusik's official MySpace page, their next album will be available in the fall of 2008. [1] T?l?popmusik consists of musicians Fabrice Dumont (bassist of the pop band Autour de Lucie), Stephan Haeri (also known as 2 square for his solo projects), and Christophe Hetier.

Guest vocalist on both albums was Mau from Earthling, who appeared on Genetic World as Soda-Pop (tracks "Genetic World", "Da Hoola" and "Trishika") and on the second album as Mau ("Anyway", "Last Train To Wherever", "Hollywood On My Toothpaste", "Tuesday" and "15 Minutes").

The track "Breathe" from the album Genetic World was used by Mitsubishi to launch the 2003 Outlander. It was also nominated for a Grammy Award in the category Best Dance Recording at the ceremony held in February 2004. Angela McCluskey, the co-writer and guest vocalist on "Breathe", is from the American band Wild Colonials.

[edit] Albums
Genetic World (2001)
Angel Milk (2005)
Untitled Album (2009)
The track "Last train to wherever" from Angel Milk was featured in the final scene of the 3rd Season premi?re of Nip Tuck.

The track "Don't Look Back" from the album Angel Milk was used in a love scene between two women in the American series The L Word.

"Breathe" was used to great effect in the 2005 French movie "The Beat That My Heart Skipped" ("De Battre Mon Coeur S'est Arrete"), directed by Jacques Audiard.

A jazz/torch version of "Yesterday Was a Lie" from Genetic World, covered by Chase Masterson, plays a role in the film of the same name.

In November 2008, IBM used the track "L'Incertitude D'Heisenberg" in a video about the company's history.

Love Can Damage Your Health (CDS)

Love Can Damage Your Health (MCD)

Love Can Damage Your Health