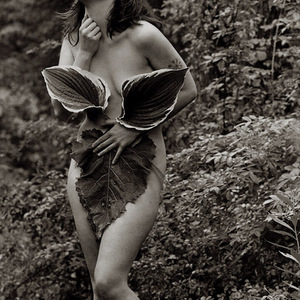 Bj?rk Gu?mundsd?ttir (born 21 November 1965) is an Icelandic singer-songwriter, composer, music producer, and occasional actress, whose work includes seven English solo albums and two film soundtracks. She is known for including elements of rock, jazz, electronic, classical, industrial, folk and trip-hop music in her work. Her voice has also been acclaimed for its distinctive qualities. She is also known for her eccentric costumes and music videos. Her singles "It's Oh So Quiet", "Army of Me" and "Hyperballad" all charted in the UK Top 10.

She is known for including elements of rock, jazz, electronic, classical, industrial, folk and trip-hop music in her work. Her voice has also been acclaimed for its distinctive qualities. She is also known for her eccentric costumes and music videos. Her singles "It's Oh So Quiet", "Army of Me" and "Hyperballad" all charted in the UK Top 10.

Her record label, One Little Indian, reported in 2003 that she had sold more than 15 million albums worldwide. She has been nominated for 13 Grammy Awards, an Academy Award and two Golden Globe Awards (including one for acting). For her performance in Dancer in the Dark, Bj?rk won the Best Actress Award at the 2000 Cannes Film Festival. She was ranked #36 on VH1's "The 100 Greatest Women in Rock and Roll" and #8 on MTV's "22 Greatest Voices in Music".

Bj?rk was born and raised in Reykjav?k, Iceland. Her musical career began when she was eleven with her study of classical piano in elementary school. One of her instructors sent a recording of Bj?rk singing Tina Charles' song I Love To Love to R?V, then the only radio station in Iceland. The recording was broadcast on national radio - after hearing it, a representative of the F?lkinn label contacted Gu?mundsd?ttir, to offer a record contract, and Bj&ouml;rk was recorded and released in 1977. In November 1979, her eponymous first album was released; the record contained covers of several pop songs, including the The Fool on the Hill and boasted artwork from her mother and guitar work from her stepfather. Bj?rk became a hit within Iceland and was not released in any other country.

Bj?rk's musical tastes were changed by the punk revolution of the late '70s; in 1979, she formed a post-punk group called Exodus and, in the following year, she sang in Jam 80.

In her teens, Bj?rk was influenced by punk; at 14 she formed the all-girl punk band Spit and Snot, shortly followed by the jazz fusion group, Exodus in 1979. In 1980 she graduated from music school. In 1981 she and bassist Jakob Magn?sson formed another band called Jam-80, which later became Tappi T&iacute;karrass (which means "Cork the Bitch's Ass" in Icelandic), and released an extended single, "B?ti? Fast ? V?ti? in the same year. Their next album, Miranda, was released in 1983.

Afterward, Bj?rk collaborated with Einar ?-rn Benediktsson and Einar Melax from Purrkur Pillnikk, and Gu?laugur ?ttarsson, Sigtryggur Baldursson, and Birgir Mogensen from ?eyr. After writing songs and rehearsing for two weeks, the new band, KUKL ("sorcery" in Icelandic), developed a sound described as gothic rock. Bj?rk began to show indications of her trademark singing style, which was punctuated by howls and shrieks.

KUKL toured Iceland with anarchist UK punk band, Crass, and later visited the UK in a series of performances with Flux of Pink Indians. They produced two albums as a result of these collaborations: The Eye in 1984, and Holidays In Europe in 1986, both on Crass Records.

The band was eventually dissolved, in part due to the closure of their label, Gramm. In mid-1986, several members of KUKL and the surrealist group, Medusa, got together to create the arts collective Smekkleysa (Bad Taste). They created a musical division, a band again called KUKL, but soon changed the name to The Sugarcubes.

Bj?rk first came to prominence as one of the lead vocalists of the avant-pop Icelandic sextet the The Sugarcubes, but when she launched a solo career after the group's 1992 demise, she quickly eclipsed her old band's popularity. Instead of following in the Sugarcubes' arty guitar rock styles, Bj?rk immersed herself in dance and club culture, working with many of the biggest names in the genre, including Nellee Hooper, Underworld, and Tricky. Debut, her first solo effort (except for an Icelandic-only smash released when she was just 11 years old), not only established her new artistic direction, but it became an international hit, making her one of the '90s most unlikely stars.

The Sugarcubes became one of the rare Icelandic bands to break out of their native country when their debut album, Life's Too Good, became a British and American hit in 1988. For the next four years, the group maintained a successful cult following in the U.K. and the U.S. while they were stars within Iceland. During 1990, Bj?rk recorded a set of jazz standards and originals with an Icelandic bebop group called Bj?rk Gu?mundsd?ttir & tr?? Gu?mundar Ing?lfssonar]. The album, Gling-Gl&oacute;, was released only in Iceland. By 1992, tensions between Bj?rk and Einar had grown substantially, which resulted in the band splitting apart.

Following the breakup of the group, Bj?rk moved to London, where she began pursuing a dance-oriented solo career. The previous year, she had sung on Ooops, which sparked her interest in club and house music. She struck up a working relationship with Nellee Hooper, a producer who had formerly worked with Soul II Soul and Massive Attack. The first result of their partnership was Human Behaviour which was released in June of 1993. "Human Behaviour" became a Top 40 hit in the U.K., setting the stage for the surprising number three debut of the full-length album, Debut. Throughout 1993, Bj?rk had hit U.K. singles -- including Venus as a Boy, Big Time Sensuality, and the non-LP Play Dead, a collaboration with David Arnold taken from the film Young Americans -- as well as modern rock radio hits in the U.S. She earned rave reviews in both countries. At the end of the year, NME magazine named Debut the album of the year. Additionally, she won BRIT Awards for both International Female Solo Artist and Newcomer. Debut went gold in the U.S. and platinum in the U.K.

During 1994, Bj?rk was relatively quiet as she recorded her second album with Nellee Hooper, Tricky, 808 State's Graham Massey, and Howie B of Mo' Wax Records. She also released a remix EP, co-wrote the title track for Bedtime Stories, and performed on MTV Unplugged that same year. Army Of Me, the first single from Bj?rk's forthcoming album, Post, was released as a teaser single in the spring of 1995. It debuted at number ten in the U.K. and became a moderate alternative rock hit in the U.S. Post, her second full-length solo album, was released in June of 1995 and garnered positive reviews. It peaked at number two in the U.K. and number 32 in the U.S. Post matched its predecessor in terms of sales and praise, going gold in the U.S. and helping her earn her second BRIT Award for Best International Female Artist. It yielded the British hit singles Isobel (#23), It's Oh So Quiet (#4) and Hyperballad (#8). Despite her commercial success in the UK, her singles failed to make much headway on American radio or MTV.

In late 1996, she released Telegram, an album of radically different remixes of the entire Post album, in the U.K. Its American release followed in January 1997.

Homogenic was released on 23 September 1997 and spawned many remix releases in the next few years to follow.

In the spring of 2000, she was named Best Actress by jurors at the Cannes Film Festival for her work in Lars von Trier's Palme d'Or-winning Dancer in the Dark. Selmasongs, her score for the film, reunited Bj?rk with her Homogenic collaborator, Mark Bell, and arrived in Fall of 2000, just in time for Dancer in the Dark's U.S. release.

She released a Greatest Hits collection and the Family Tree box set late in 2002.

After performing a few dates in 2003, Bj?rk worked on her all-vocals and vocal samples-based album, Med&uacute;lla, and a performance of its first single, Oceania, at the 2004 Summer Olympics in Athens, Greece.

The soundtrack to Drawing Restraint 9, a film by multimedia artist Matthew Barney, arrived in 2005 and also featured contributions from Will Oldham. Bjork also starred in the film, which would never see a DVD release and is only viewable in select art museums.

Her next album, Volta, was released on 8 May 2007. Volta features collaborations with Timbaland, Mark Bell, and Antony Hegarty of Antony and the Johnsons. The album's first single, Earth Intruders, was released digitally on 9 April 2007.

Her most recent album, Biophilia, was released on the 5th of October, 2011, with Bj?rk and 16bit producing.