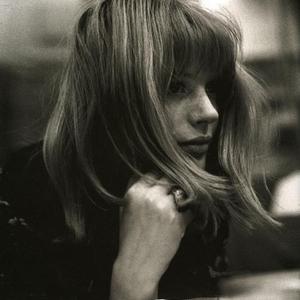 Marianne Faithfull (born 29th December 1946) is an English singer-songwriter and actress whose career spans more than four decades. Faithfull was born in Hampstead, London, to a military officer father, Major Glynn Faithfull, and the Baroness Eva Erisso, a Viennese noblewoman of half Jewish and half noble Austrian descent, coming from the Habsburg dynasty. Faithfull attended a Roman Catholic girls school.

Faithfull was born in Hampstead, London, to a military officer father, Major Glynn Faithfull, and the Baroness Eva Erisso, a Viennese noblewoman of half Jewish and half noble Austrian descent, coming from the Habsburg dynasty. Faithfull attended a Roman Catholic girls school.

Faithfull began her singing career in 1964 after being discovered at a launch party for The Rolling Stones by pop music producer Andrew Loog Oldham. Her first hit, "As Tears Go By", was written by Mick Jagger[1] and Keith Richards. She then released a series of successful singles, including "This Little Bird", "Summer Nights", and "Sister Morphine" (which she co-wrote with Jagger).

Faithfull married artist John Dunbar in 1965, and in that same year gave birth to a son named Nicholas. The marriage was short-lived however, and Faithfull began a much publicised relationship with Mick Jagger. The relationship with Jagger lasted throughout the late 1960s. After they split up in 1970, Faithfull briefly stopped recording and nursed a drug addiction. She moved to Dublin in the middle of the 1970s, and had quite a success with "Dreaming My Dreams", which reached the top of the Irish pop charts.

She returned to recording in 1979 with Broken English, one of her most critically hailed album releases. Broken English also saw Faithfull emerge as a songwriter of some ability, with powerful songs on follow up albums Dangerous Acquaintances and A Child's Adventure. Her success continued throughout the 1980s, culminating with Strange Weather (1987), her most critically lauded album of the decade.

When Roger Waters assembled an all-star cast of musicians to perform the rock opera The Wall live in Berlin in July 1990, Faithfull played the part of Pink's over-protective mother.

Faithfull's musical career had a second fillip during the early 1990s with the recording of the live album Blazing Away and performances of the work of Bertolt Brecht and Kurt Weill. She released a recording of The Seven Deadly Sins and also performed in The Threepenny Opera. Her interpretation of the music of this era has been critically acclaimed, and led to a new album, Twentieth Century Blues, and a successful concert and cabaret tour.

In 1994 she published her autobiography, Faithfull. The next year she recorded A Secret Life, with songs written with Angelo Badalamenti, a composer favored by film director David Lynch.

Faithfull also sang with Metallica providing backing vocals on "The Memory Remains" from their 1997 album Reload, and appeared in the song's surrealistic video.

Faithfull's 1999 DVD Dreaming My Dreams contains material about her childhood and parents, historical video footage going back to 1964, and interviews with the artist and several women friends who have known her since she was a young girl. There are sections on her relationship with first husband John Dunbar and with Mick Jagger, and brief interviews with his fellow Rolling Stone Keith Richards, with whom she has remained on friendly terms since the 1960s. The DVD concludes with a thirty-minute live concert.

The new millennium has seen Faithfull's talent flourish, with every album receiving critical praise. In 2000 she released Vagabond Ways, which was hailed as one of the finest of her career, and certainly showed her songwriting reaching a new peak. Her renaissance continued with Kissin' Time (2002), with songs written with Beck, Billy Corgan, Jarvis Cocker, Dave Stewart, David Courts, and the French pop singer Etienne Daho. On this record, she paid tribute to Nico (with "Song For Nico") whose work she admired, and showed a strong sense of humour with the autobiographical "Sliding Through Life On Charm". This was followed in 2004 by Before the Poison, a collaboration with PJ Harvey, Nick Cave, Damon Albarn, and Jon Brion. It was considered by many critics to be the best work of her career, though to much of the public Broken English remains her definitive record. In 2005, Andre Schneider did a cover version of her song "The Hawk".

With a recording career that spans over four decades, Faithfull has continually reinvented her musical persona; experimenting in vastly different musical genres and collaborating with such varied artists as David Bowie, The Chieftans, Tom Waits, Lenny Kaye, and Pink Floyd.

Faithfull also made a modestly successful foray into an acting career and has given notable performances in the 1967 film I'll Never Forget What's 'Is Name alongside Orson Welles, as a leather-clad motorcyclist in the 1968 French film Girl on a Motorcycle opposite Alain Delon, and in the 1969 Kenneth Anger cult film Lucifer Rising. In 1969, Faithfull played Ophelia in the Nicol Williamson adaptation of Hamlet. In 1993 she played the role of Pirate Jenny in The Threepenny Opera at the Gate Theatre in Dublin. Later she performed The Seven Deadly Sins with the Vienna Radio Symphony. She has made brief guest star appearances in the British sitcom Absolutely Fabulous (as God), in Patrice Ch?reau's Intimacy (2001 film), and plays Empress Maria-Teresa in Sofia Coppola's biopic Marie-Antoinette, starring Kirsten Dunst in the title role.

She also pursues a theatrical career. In 2004 and in 2005, she appeared in Robert Wilson and Tom Waits's The Black Rider. Faithfull currently lives in Paris, France, and still regularly appears in concerts. Most recently she performed a duet on Patrick Wolf's new album The Magic Position.

She Walks In Beauty (With Warren Ellis)

Give My Love to London

As Tears Go By (CDS)