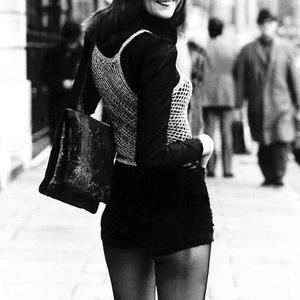 Cilla Black OBE (born Priscilla Maria Veronica White on 27 May, 1943) is an English singer and television personality. After a successful recording career, she went on to become the highest paid female presenter in British television history. In 2013, Cilla Black celebrates 50 years in show business, as a prelude to this landmark anniversary EMI (the record label which launched her career in 1963) release 'Completely Cilla: 1963-1973' - a 5CD set containing all of her songs produced by George Martin with a bonus DVD of rare BBC TV music performances.

Cilla Black was born in Liverpool to a Protestant father and a Catholic mother. As a child she was encouraged to sing by her family. In the early 1960s, determined to break into show business, she got a part-time job as a cloakroom attendant at the famous Cavern Club in Liverpool, where The Beatles regularly played. Ideally placed to promote herself to local musicians, she impressed the Beatles and others with her talent and began her stage career with impromptu performances at the Cavern. She became a guest singer with Merseybeat bands Rory Storm and the Hurricanes, Kingsize Taylor and the Dominoes, and later The Big Three. During this period she also worked as a waitress at the Zodiac coffee lounge, where she met her future husband Bobby Willis.

Brian Epstein, a former retail manager from a prominent Jewish family on Merseyside, had a stable of artists drawn from the local music scene, headed by the Beatles. Initially, he showed little interest in Cilla, often billed as Swinging Cilla, or Cilla White. She was introduced to Epstein by John Lennon who persuaded him to audition her. Her first audition was a failure, partly because of nerves, and partly because the Beatles (who backed her) played the songs in their vocal key rather than re-pitching them for Cilla's voice. In her autobiography What's It All About? (Ebury Press ISBN 0-09-189036-5) she wrote:

I'd chosen to do 'Summertime', but at the very last moment I wished I hadn't. I adored this song, and had sung it when I came to Birkenhead with the Big Three, but I hadn't rehearsed it with the Beatles and it had just occurred to me that they would play it in the wrong key. It was too late for second thoughts, though. With one last wicked wink at me, John set the group off playing. I'd been right to worry. The music was not in my key and any adjustments that the boys were now trying to make were too late to save me. My voice sounded awful. Destroyed - and wanting to die - I struggled on to the end.

But after seeing her at a later date, at the Blue Angel jazz club, Epstein signed Cilla up as his only female client on 6 September 1963. The local music paper Mersey Beat misprinted her name as Cilla Black, but Epstein liked the sound of it.

Epstein signed Cilla to Parlophone records and introduced her to George Martin, who produced her debut single, Love of the Loved (written for her by Lennon and McCartney), which was released only three weeks after she signed with Epstein. The single peaked at a modest #35, a failure compared to debut releases of Epstein's other artists.

Her second single - released at the beginning of 1964 - was the Burt Bacharach-Hal David composition Anyone Who Had a Heart. In the USA it had already been a hit for Dionne Warwick, and Cilla's version shot to #1 in Britain. Cilla Black and Dionne Warwick became arch-rivals during the Sixties, with Black covering her American releases often before Warwick had the opportunity to release them herself in the UK. In his book Black Vinyl White Powder, Simon Napier-Bell pointed out the irony of this. "Cilla Black", he said, had "this huge, brash, wailing sound" while Dionne Warwick "was the most subtle singer in the whole of pop."

Her second UK #1 hit, You're My World, was an English-language reading of the Italian popular song Il Mio Mondo. She also enjoyed chart success with the song in the Australia, New Zealand and Europe. This was followed by another Lennon-McCartney composition, It's For You. Paul McCartney played piano at the recording session.

Cilla Black belonged to a generation of British female singers which included Dusty Springfield, Sandie Shaw, and Lulu. These artists were not singer-songwriters but interpreters of Sixties contemporary pop writing. Cilla Black covered a great range of material during this time, including songs written by Phil Spector, Randy Newman, Tim Hardin, and Burt Bacharach. All were produced by George Martin at Abbey Road Studios. Being a member of the close-knit Beatles circle, Cilla often became the first singer to cover Lennon-McCartney compositions.

Black's career in the USA - although launched enthusiastically by Epstein and his PR team - was limited to a handful of television appearances (the Ed Sullivan Show among them), a 1965 cabaret season at the Plaza Hotel in New York, and a minor hit with You're My World.

In 1966 Black recorded the Bacharach-David song Alfie, the theme from the film of the same name. Although on the film soundtrack it had been performed by Sonny and Cher, this version was arranged and conducted by Bacharach himself at the recording session at Abbey Road. Bacharach insisted on several takes, and Black cited the Alfie recording session as one of the most demanding of her recording career. For Bacharach's part, he later admitted to finding Black's voice "strident".

By the end of 1966 Cilla Black was showing all the hallmarks of an all-round entertainer. That year she had guested on Peter Cook and Dudley Moore's Not Only... But Also, appeared in a Ray Galton - Alan Simpson revue in London's West End - Way Out In Piccadilly - alongside Frankie Howerd, made notable appearances on The Eamonn Andrews Show, and starred in her own television special (the first of its kind to be shown in colour) - Cilla at the Savoy.

Brian Epstein's attempts to move Cilla Black into films were less successful. A brief appearance in the beat film Ferry Cross the Mersey and a leading role alongside David Warner in the 1967 psychedelic comedy Work Is a Four-Letter Word were largely ignored by film critics. In a 1997 interview with Record Collector magazine, Black revealed she was asked to appear in the 1969 film The Italian Job, playing the part of Michael Caine's girlfriend, but negotiations fell through between producers and her management over her fee.

Brian Epstein died of an accidental drug overdose in August 1967, after negotiating a contract with the BBC for his only female artist to appear in a series of her own. Relations between Epstein and Black had somewhat soured in the year prior to his death, largely due to the fact that Epstein was not paying her enough attention. In her autobiography, Cilla claims that Epstein had tried to pacify her by negotiating a deal that would see her representing the UK in the 1968 Eurovision Song Contest. However, Black refused on the basis that Sandie Shaw had won the previous years contest, and that the chances of another British female artist winning were improbable, incidentally the following year Lulu represented the UK and won with Boom Bang A Bang

The first series of Cilla was broadcast on January 30 1968. On the first show her guest was Ringo Starr. The two pop stars sang a duet together. Paul McCartney (without Lennon) wrote the theme tune - another chart hit for Black - entitled "Step Inside Love". Henry Mancini, Tom Jones, Donovan, Georgie Fame and Dusty Springfield were among the artists who appeared in the earlier series of Cilla, however many programmes were later wiped from the BBC's archives. Her BBC show became a phenomenon, and paved the way for a lengthy television career which has continued until the present day.

A handful of recording successes followed: the oddly paced Conversations, Surround Yourself With Sorrow (1969), If I Thought You'd Ever Change Your Mind and the hugely popular Something Tells Me (Somethings Gonna Happen Tonight) (1971).

The Beatles connection continued. At a Cannes Film Festival during the 1970s Cilla joined George Harrison, Ringo Starr and glam-rock pop star Marc Bolan to attend a screening of the John Lennon-Yoko Ono experimental film Erection. She also holidayed with them on this trip aboard a yacht chartered by Ringo. "Photograph" was written on this trip - originally intended for Black to record - but Starr decided to record it himself. George Harrison also wrote two songs for Cilla - The Light That Lights Up The World and I'll Still Love You (When Every Song Is Sung). The latter she recorded in 1974, but it was not heard publicly until 2003, when it surfaced on a retrospective collection entitled The Best of 1963-78.

Like so many of her contemporaries, during the 1970s her musical career was in decline, although her albums sold well and she often toured. Increasingly thought of as a television "personality", she found herself experimenting with situation comedy for ITV in Cilla's World of Comedy and Cilla's Comedy Six. Her BBC series, Cilla, continued successfully throughout the 1970s.

During the early 1980s, Cilla joined London Weekend Television and hosted for them prime-time entertainment shows ? ?Surprise!, Surprise!' (1983-1997; 14 Series) and ?Blind Date' (1985-2003; 18 Series). The latter show earned Cilla an award from the British Academy of Film and Television Arts.

In 1997, Cilla was honoured with an OBE (Order of the British Empire) by Queen Elizabeth II for her achievements in the entertainment industry.

In 1999, after 30 years of marriage, Cilla's beloved husband and manager Bobby Willis sadly passed away at the age of 57.

In 2013, Cilla Black celebrates her 50th anniversary in the entertainment business.

It Makes Me Feel Good