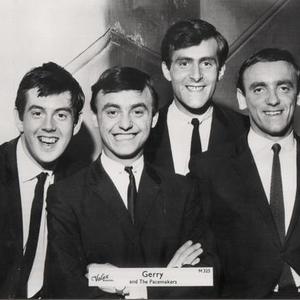 Gerry Marsden formed Gerry & The Pacemakers in the late 1950s with his brother, Fred Marsden, Les Chadwick and Arthur Mack. They rivalled The Beatles early in their career, playing in the same areas of Hamburg, Germany and Liverpool, England. Mack was replaced on piano by Les Maguire around 1961. They are known to have rehearsed at Camell Laird shipping yard at Birkenhead. They began recording in early 1963 with "How Do You Do It?", a Mitch Murray written song that both Adam Faith and The Beatles had turned down (in the latter case because they wanted to record their own material...

They began recording in early 1963 with "How Do You Do It?", a Mitch Murray written song that both Adam Faith and The Beatles had turned down (in the latter case because they wanted to record their own material, specifically "Please Please Me"). The song became a number one hit, until being replaced at the top by The Beatles' third single, "From Me to You".

Gerry & The Pacemakers next two singles, Murray's "I Like It" and Rodgers And Hammerstein's "You'll Never Walk Alone", both also reached number one in the UK Singles Chart. Never before had the first three singles by a performer all reached the top spot (the feat would not be duplicated until Frankie Goes to Hollywood did it in the 1980s).

Despite this early success, Gerry & The Pacemakers never had another number one single in the U.S. Gerry Marsden began writing most of their own songs, including "It's All Right", "I'm The One", and "Ferry Cross The Mersey", as well as their first and biggest U.S. hit, "Don't Let The Sun Catch You Crying". All of these represented the band's light, poppy, enjoyable sound. They also starred in a moderately successful early 1965 film called Ferry Cross the Mersey, for which Marsden wrote much of the soundtrack.

By later in 1965, though, their popularity was rapidly declining on both sides of the Atlantic. They lacked the innovation of the Beatles and did not have the rawer musical and visual edge of some of the other British Invasion groups, and they soon seemed un-hip. They disbanded in October 1966 with much of their latter recorded material never released in the UK.

They are probably now best known for their version of "You'll Never Walk Alone," which has become the anthem for Liverpool Football Club in England. Liverpool's fans sing the song before every match at Anfield, their home stadium.

The Best Of The EMI Years

The Best Of Gerry & The Pacemakers - The Definitive Collection

Don't Let The Sun Catch You