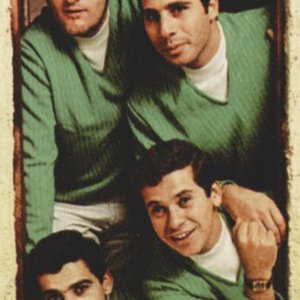 The original version of the group was formed in 1955 at Brooklyn's Lincoln High School. Featuring Neil Sedaka, Hank Medress, Eddie Rabkin, and Cynthia Zolitin, the group was known as the Linc-Tones. After Rabkin was replaced by Jay Siegel in 1956, the Linc-Tones recorded their first single. Two years later, Sedaka and Zolitin left the band; Sedaka would go on to make a name for himself as a popular solo artist, and singer-songwriter, during the 1960s and 1970s. By 1960, the classic group line-up was in place, containing Siegel, Medress and Margo Brothers Mitch and Phil.

The group renamed itself The Tokens.

In early 1961, The Tokens released a single for Warwick Records entitled "Tonight I Fell In Love," which went to #15 on the Billboard Hot 100 chart and spurred them to an appearance on American Bandstand. This proved to be a prelude to the unleashing of their signature song for RCA, "The Lion Sleeps Tonight" (which had earlier been recorded by South African artist Solomon Linda, as well as U.S. folk group The Weavers). Jay Siegel's characteristic lead vocals helped the song rise all the way to #1, where it remained for three weeks.

From 1962 to 1970, the group would put nine more songs in the Top 100, including "I Hear Trumpets Blow" and "Portrait of My Love." They also began producing for other artists, such as The Chiffons. In 1973, Siegel teamed with the Margo Brothers to form the group Cross-Country; this trio had a minor hit with their cover of "In The Midnight Hour."

Today, Mitch and Phil Margo continue to perform with "new" members Jay Leslie, Mike Johnson and Noah Margo on drums (one of Phil's sons). Mitch's sons, Damien and Ari Margo make guest performances from time to time. As Phil Margo says, "If you hang around long enough you can grow your own band."

Wimoweh!!! The Best Of The Tokens