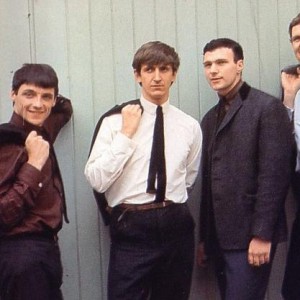 The Fourmost formed in 1959 as the Four Jays and had a rock/jazz/comedy act. They changed to The Fourmost after finding out a southern group had the same name. Their first recording, ?Hello Little Girl', was written by John Lennon, supposedly, while ?Sitting on the toilet', the record reached No.9 in the charts. Their second release was a Lennon & McCartney song the Beatles hadn't used on an album and written specifically for them called ?I'm In Love', reaching No.17 in the charts.

Their biggest hit, ?A Little Loving' was written by Russell Alquist, husband of actress Juliet Mills, and reached No.6. Their three other releases, ?How Can I Tell Her?', ?Baby I Need Your Loving' and ?Girls, Girls, Girls' all reached the charts. Some years later, Paul McCartney found a song called ?Rosetta' and offered to produce it for them ending up playing piano on the record, unfortunately it failed to reach the charts. Through to the 1970's the group continued to appear in cabaret but by then original members had started to drift away leaving Brian O'Hara as the only original Fourmost.