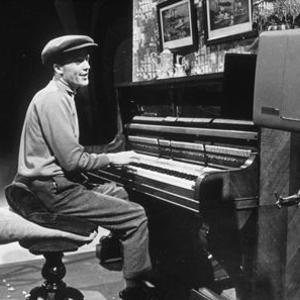 Gilbert O'Sullivan was born Raymond Edward O'Sullivan on 1st December 1946 in Waterford in Ireland. His father worked in a meat factory while his mother ran a sweet shop. In 1958 at the age of 11 he moved with his family to Swindon in England in search of a better life. He attended St. Joseph's Comprehensive school in Swindon. While there he developed an interest in both music and amateur boxing. Musically he began with the guitar and progressed to the piano.

In the boxing ring he had nearly 50 bouts. Meanwhile his painting and drawing had won him a place at Swindon Art College. He started there in September 1963. His aim was to be a graphic designer. He played drums in his first group The Doodles and left them to join The Prefects while attending Swindon Art College. It was while at college that he met Rick Davies, who was later a member of Supertramp. While at college he began writing songs and sending out demo tapes, alas they were always returned unopened. The first song he remembers writing was Ready Miss Steady.

After finishing college, Gilbert moved to London in 1967 to try and further his musical career. He took a part-time job as a salesman at the C & A department store in Oxford Street. Mike Ward who also worked at C & A, had a contract with CBS and Gilbert went with him one day and played his tapes for some of the CBS executives. Gilbert signed a five year publishing contract with CBS which called for one single a year, and released two singles Disappear/You in 1967 and What Can I Do/You in 1968. Gilbert was disappointed that he was not allowed any input into the arranging or production of the singles. Neither single did well. Disillusioned with CBS, Gilbert signed with the Major Minor label and released I Wish I Could Cry/Mr. Moody's Garden in 1969.

Gilbert came to the attention of BBC Radio 1 disc jockey, John Peel, who gave him a slot on his radio show Top Gear, little of note resulted, and O'Sullivan spent part of 1969 applying to other record labels and management companies. It was at this time that Gilbert formulated his 'Bisto Kid' image; grey flannel suit, flat cap, school boy tie, football socks and hobnail boots. In search of a manager he sent some demo tapes to Gordon Mills, an ex-pop singer and himself a songwriter of repute, who had successfully guided the careers of Tom Jones and Engelbert Humperdinck. Gordon Mills recognised something unique in the young Irishman and signed him for management as well as to a songwriting contract.

Gilbert made an irresistible impression with Nothing Rhymed, his first Top 10 hit and an introduction to his witty lyrics and original approach as a singer/songwriter. Signed to MAM Records, the label launched by Gordon Mills, who was also his record producer, great friend and surrogate older brother, O'Sullivan enjoyed four years of major success, incorporating a dozen more hit singles, ten of which reached the UK Top 10, and four Top 5 albums: Himself (1971), Back To Front (1972), I'm A Writer Not A Fighter (1973) and A Stranger In My Own Back Yard (1974).

Both Clair (written about Mills's infant daughter for whom Gilbert occasionally babysat) and Get Down were number one hit singles in Britain, and additionally, Back To Front topped the UK LP chart in 1972, emulating the success of the two million seller Alone Again (Naturally), a six week US chart-topper in 1972. Gilbert made his live debut in The National Stadium in Dublin in October of '72. Around this time, the singer jettisoned his so-called "Bisto Kid" image in favour of an endless series of collegiate-styled sweaters embossed with the letter "G". As quickly as O'Sullivan ascended to fame, however, his star began to fall , although singles like Ooh Baby and Happiness Is Me and You continued to chart, they sold increasingly fewer copies, and after 1973 his overseas popularity essentially ceased altogether. At home, he notched his final Top 20 hit with 1975's I Don't Love You But I Think I Like You. After a Greatest Hits album in 1976, and Southpaw in 1977, by which time the hit singles had dried up, disagreements over future direction led to a bitter split between O'Sullivan and Mills, which effectively sidelined the former as a recording artist for five years. The gruelling court case between O'Sullivan and his erstwhile manager, producer, music publisher and record company boss finally gave him control of his own recordings and the copyright in his songs, although it exacted an inevitable toll on his energy and his creativity during it's precedent-setting course.

Gilbert returned to CBS in 1980 and released Off Centre (1980) and Life & Rhymes (1982) but maintained a low profile during much of the 1980s, recharging his batteries and moving to Jersey, where he still lives with his wife and two children. Off Centre provided his 13th UK Top 20 single, What's In A Kiss?, after which legal proceedings monopolised his time. However, he continued writing songs, performing what he called "concepts within four walls" rather than starting back on the road before it was appropriate. He later recalled that the lyrics he wrote during that period were too heavily influenced by his personal emotions - having been extremely close to Mills before their disagreement, he was highly distressed to discover that his dear friend had been guilty of considerable financial greed at Gilbert's expense. Even so, he applied himself to his lonely creativity, working from 9 to 5 each day "just like Goffin & King and people like Neil Sedaka & Howard Greenfield at the Brill Building in New York used to do", although he later confessed "Really, the words were no good, because my mind was cluttered with all the problems". Lyrics have always been O'Sullivan's most unique facet, reflecting what's going on in his mind, and the strain under which he found himself was hardly conducive to much positive artistic or commercial creativity.

The first release for five years was Frobisher Drive and was only available in Germany. The same album with a slightly different track listing was released in the UK in 1989 under the title In The Key Of G, and included So What, his first chart single in almost a decade. Since the low-key comeback, the pace has increased, with five more albums. Gilbert also made a return to live performances in the early nineties, playing regularly in both Europe and Japan. In 1991, Gilbert was again in court, this time he sued American rapper Biz Markie and won the decision after Markie's unauthorized sample of "Alone Again (Naturally)" on his 1991 album I Need a Haircut. A 1992 single, Tomorrow Today had topped the Japanese charts for nine weeks, and this success led to a tour of Japan in early 1993 with his newly formed backing group, during which he recorded and filmed his first ever live album Tomorrow Today. Gilbert's newfound success in Japan led to the Japanese only release of The Little Album (1992) and Rare Tracks (1992). 1993's critical acclaimed Sounds Of The Loop (Daily Telegraph's Record Of The Week) included a duet with the legendary Peggy Lee on Can't Think Straight and even a solo version of the same song in Japanese. This album was recorded almost entirely at his home in Jersey in the Channel Islands.

By Larry (with a similar track listing to the Japanese released The Little Album) was released in 1994. Larry is a famous English cartoonist, much admired by Gilbert. Larry provided original cartoons for the album sleeve and booklet. Every Song Has It's Play was released the following year and was the soundtrack of the semi-autobiographical stage show that Gilbert had acted and sang in, in 1991. Singer Sowing Machine was released in 1997. The title is a humorous reaction by Gilbert to being constantly referred to as a singer/ songwriter. Irlish was released in 2000 and yielded three singles, Have It, Say Goodbye and Two's Company (Three Is Allowed). The album title Irlish, combination of the words Irish and English, appropriate for someone born in Ireland and raised in England. Gilbert's family was part of this migration. In 2001 The Official Gilbert O'Sullivan Website was launched as well as his own record label ByGum Records.

Gilbert continued to tour and he played a series of concerts in Ireland in 2001 and in the UK in 2002 to promote the Irlish album. A new studio album Piano Foreplay followed in 2003. In 2004 Rhino Handmade Records released a 3 CD anthology in the USA of Gilbert's music entitled Caricature: The Box. It contains 73 tracks which span the years 1967-2001. This is the first in-depth survey of Gilbert's lengthy career. It contains numerous singles and B-sides, tracks from 16 of his albums, and five previously unreleased tracks. A b-side collection entitled The Other Sides of Gilbert O'Sullivan was released in Japan in 2004 and contained many tracks available on CD for the first time. A series of concerts followed in Japan in June 2004 followed by a 20 date European Tour of the UK, Ireland, Norway and Denmark in November and December. In February 2005 a DVD/CD set of the 2004 Japanese show was released in Japan. Gilbert returned to Japan in June 2005 for a series of 13 shows. Gilbert spent the end of 2005 and the beginning of 2006 recording his next studio album "A Scruff At Heart" which was released in Japan on 25 October 2006.

The Berry Vest Of