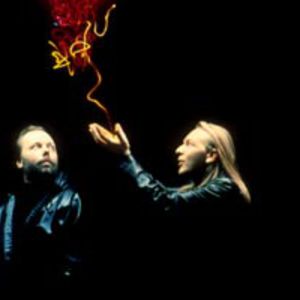 Deep Forest is a musical group consisting of two French musicians, Michel Sanchez and Eric Mouquet. They compose a new kind of world music, sometimes called ethnic electronica, mixing ethnic with electronic sounds and dance beats or chillout beats. Their sound has been described as an "ethno-introspective ambient world music". They were nominated for a Grammy Award in 1994 for Best World Music Album, and in 1995 they won the Award for the album Boheme. The group also became World Music Awards Winner - French group with the highest 1995 world sales.

Their albums have sold over 10 million copies.

Michel Sanchez came up with the idea of mixing Baka Pygmy chants with modern music after hearing on-site recordings of these tribes. Along with Eric Mouquet they created the project Deep Forest. Their first self-titled album (nominated for a Grammy) was released in 1992, with Sweet Lullaby being the smash single which would put Deep Forest on the musical map (UK Top 10 hit). The song "Sweet Lullaby" is adapted from a traditional song from the Solomon Islands. The album Deep Forest was dance-driven and the samples were heavily digitised and edited. It was re-released as a limited edition in 1994 under the name World Mix.
For their second album Boheme, Eric and Michel left behind the sounds of the forest and ventured into Eastern Europe bringing tender, lonesome Hungarian and Gypsy chants with upbeat, yet sad, music. The chants were no longer brief, instead extended phrases had been sampled from Hungarian, Russian and Transylvanian sample CDs. Marta Sebestyen performed on this album.
The duo also performed and produced the remixes for the Youssou N'Dour single "Undecided" in 1994, with guest vocals by Neneh Cherry (who featured on n'Dour's break-through single "Seven Seconds"). That same year Deep Forest made remixes for Jon Anderson's "Deseo", Apollo 440's "Liquid Cool" and Ces&aacute;ria &Eacute;vora's "My Fatigue is Endless". In 1996 Deep Forest collaborated with Peter Gabriel on the song While The Earth Sleeps, which was written for the film Strange Days.
The follow-up third album, Comparsa, contained sounds and chants from Madagascar and Cuba. The music is often upbeat and celebratory. The last song from the album Media Luna, which was also released as a single, features a duet of Syrian and Spanish singers Abed Azrei and Ana Torroja from Spanish band Mecano. The duo collaborated with Joe Zawinul during the recording of the album. A recording of their live concert in Japan was also released on a CD called Made in Japan. Although all the songs featured in the show are from the previous three albums, they have new often-longer arrangements and all the chants are performed and reinterpreted by live performers.

In 1999 Deep Forest worked with Cheb Mami and Catherine Lara on the song "L'Enfant Fleur" which had been composed for Sol En Si (a French charity which helps HIV families).

In 2000, Deep Forest released a music for the movie Le Prince du Pacifique, Pacifique. It mixes pacific and island beats with electronic music. Music Detected was the title of their fifth much-anticipated official Deep Forest album which saw the duo turn its attention to the Far East and the Orient for inspiration. It also signalled a change in musical style for Deep Forest, from dance to a more rock-influence.
In 2008 Eric Mouquet released DEEP BRASIL, this album is a collaboration with Brazilian artist Flavio Dell Isola Amazonia.
In 2009, 2010 Eric Mouquet went on tour and prepared the upcoming album Deep Africa.
This album should be released in summer 2011 and will feature lot of African artists, Lokua Kanza, Blick Bassy, Oliza, Wasis Diop, Zama Magudulela, and Wes's brother, Dany Dikoume.

Essence Of The Forest