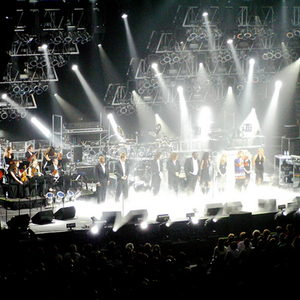 Trans-Siberian Orchestra is a rock orchestra founded in New York City, USA by Paul O'Neill, robert kinkel, Jon Oliva, and Al Pitrelli in 1996. O'Neill had managed and produced rock bands including Aerosmith, Humble Pie and Scorpions, later writing for and producing Savatage, where he began working with Kinkel and Oliva. The roots of TSO are found in Savatage, a traditional heavy metal band that gradually progressed into a symphonic metal act.

The roots of TSO are found in Savatage, a traditional heavy metal band that gradually progressed into a symphonic metal act. Savatage's rock operas, starting with STREETS, began the experimentation with what would become TSO culminating on the track "Christmas Eve (Sarajevo 12/24)" from DEAD WINTER DEAD. This track was a minor hit for the struggling band, and demonstrated that there might be an audience for the symphonic metal approach to holiday themes.

The concept for a band playing Christmas carols in a rock opera style was not received warmly by the industry, but quickly proved a success with adults as well as young people. In the recording studio, Trans-Siberian Orchestra uses a full 60-piece orchestra and a choir.

As of 2004, their touring band included 14 vocalists, 14 musicians, and 2 narrators. Trans-Siberian Orchestra released their debut album Christmas Eve and Other Stories in 1996, and it remains their best-selling album. Their 1998 release The Christmas Attic was similarly a concept album with a Christmas theme. In 2000, they released their first non-Christmas album, Beethoven's Last Night. Beethoven's Last Night is a concept album about Ludwig van Beethoven's last night on earth, during which he meets Mephistopheles (possible Satan, or one of his underlings).

After a few years of touring, they returned to the studio with another full-length album, Lost Christmas Eve, and the accompanying DVD/3-CD release The Christmas Trilogy, which contained all three of their Christmas albums to date.

During their winter tours of 2005 and 2006, the band had announced that they were working on the new album, set to release later that year (this was said both years). During the summer of 2007, the official myspace for TSO stated that they were recording, with the expression 'inspired'. Finally, on October 27, 2007, the long awaited new album (and second non-Christmas) arrived "Night Castle". The album is another concept album, spanning 2 cd's, and is the telling of the story of a soldier's experience during the Killing Fields of the Khmer Rouge. As always, it's about faith, hope, fate and the inherent belief that there is good in all people. The album was received with mixed reviews, from the praise of the band's fans, to the near burning of albums by those that are less than receptive to the album. Along with the songs for the story, the album also includes 4 tracks that are not part of the story, and yes, it features the band's rendition of "Carmina Burana (O Fortuna)", performed as a preview by the band during their winter tours, as well as one cover of a Savatage song.

The Ghosts Of Christmas Eve

Letters From The Labyrinth

Upon The Winter Solstice

Tales Of Winter: Selections From The Tso Rock Operas

Dreams Of Fireflies (On A Christmas Night)

Dreams Of Fireflies (On A Christmas Night) (EP)