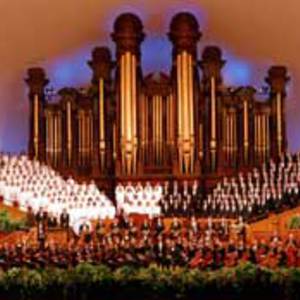 The Mormon Tabernacle Choir is a large choir of The Church of Jesus Christ of Latter-day Saints (the Mormons). Since July 15, 1929, the choir has performed a weekly radio broadcast called Music and the Spoken Word which is the longest-running continuous network broadcast in the world. The show has been televised since the early 1960s and is now broadcast worldwide through some 1,500 radio, television, and cable stations.

Called "America's Choir" by U.S. President Ronald Reagan, the Mormon Tabernacle Choir is made up of some 360 men and women, all of whom are volunteers. There are many husband-wife combinations and many families have participated in the choir for generations. Choir members are currently limited to twenty years of participation, allowing new members to join the choir on a regular basis.

The choir was founded in August 1847, one month after the Mormon Pioneers entered the Salt Lake Valley. The choir is completely self-funded, traveling and producing albums to support their organization. Choir members are not paid for their participation or performances.

Although the choir has traditionally been recognized for its sound quality, the most recent director, Craig Jessop, a student of Robert Shaw, has made changes designed to improve the overall quality of the choir. Jessop's efforts to add vitality to the choir's sound include the formation of The Orchestra at Temple Square, the 2005 addition of The Bells on Temple Square (a hand bell choir), and continual refinement of the choir's tone, enunciation, and repetoire. The minimum age for participation has been reduced from 30 to 25. In addition, new choir members participate in The Temple Square Chorale training choir, a combination music theory/performance school led by associate director and composer/arranger Mack Wilberg.

Let the Season In

Once Upon A Christmas

This Is The Christ

The Most Wonderful Time of the Year

Come, Thou Fount Of Every Blessing: American Folk Hymns & Spirituals

Praise To The Man: Songs Honoring The Prophet Joseph

Rejoice And Be Merry