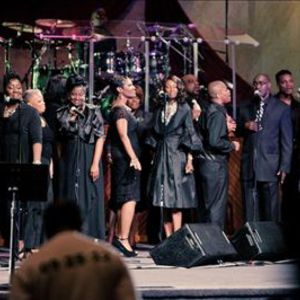 THE PRAISE AND WORSHIP OF SHEKINAH GLORY MINISTRY Shekinah Glory Ministry's ultimate purpose is reflected in the meaning of its name -- to usher listeners into the "very manifest presence of God." Shekinah Glory Ministry (SGM) is not comprised of "recording artists," but servants that worship every Sunday as the praise and worship aggregate of Valley Kingdom Ministries International, a non-denominational church in the Chicagoland area where Apostle H. Daniel Wilson serves as Senior Pastor.

Shekinah Glory's worship style incorporates a unique variety of ballads and contemporary praise and worship selections.
Unrehearsed prophetic worship and spiritual warfare selections are birthed during their recordings and appearances.
The ministry has traveled nationally and internationally teaching local praise teams the songs of Shekinah Glory.

SGM's premiere recording, "Praise is What I Do" was certified Gold by RIAA and is reaching Platinum. The PIWID concept video has appeared on BET Gospel and Lift Every Voice. Ultimately, the CD received local, national and international success and was included on the WOW Gospel 2003 CD which was certified Gold and Platinum.

SGM's second live praise and worship double CD, SHEKINAH GLORY MINISTRY LIVE, was released and immediately hit
BILLBOARD charts where it remained for over 103 weeks and has reached gold status. Praise and worship songs from this
release, including "YES" and "HIGHER" are still being played across the nation on independent and syndicated radio stations. This project also earned SGM nominations as a finalist for the 2005-06 Stellar Awards in the category of "CHOIR OF THE YEAR."

Shekinah Glory Ministry is dedicated to "piercing the kingdom of darkness and enlarging the Kingdom of God."