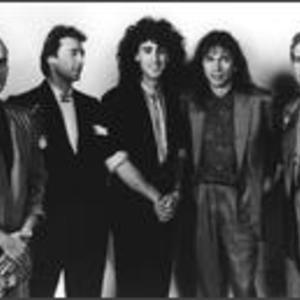 GTR's only studio album, a self-titled LP produced by Geoffrey Downes of Asia, released by Arista Records, went gold and spawned a hit single, "When the Heart Rules the Mind", which stayed in the charts for 16 weeks. Another single, "The Hunter," received some video coverage and modest airplay. While GTR's album was a chart success, it is highly debated with many fans of Genesis and Yes. Some fans claim it has rather substandard filler material and some criticism directed at Max Bacon's strident tenor. J.D. Considine's review of the album simply read, "SHT.". However, it has become somewhat of a cult classic among fans, with some of them regarding it the best work ever.

After the US tour Steve Hackett departed the band and together with new member guitarist / vocalist Robert Berry (ex Hush) they returned to the studio to record demos for their second album with workingtitle Neurotrend. During the recording process Arista Records went cold on the band. GTR split up in 1987, and soon after Robert Berry joined 3, with Carl Palmer and Keith Emerson. Max Bacon joined Geoffrey Downes and John Payne for the Rain project.

The track "Prizefighters", available only as a live recording on the King Biscuit Flower Hour disc was re-recorded by Steve Hackett with Bonnie Tyler on vocals and released in 2000 on the album Feedback 86.

2) GTR is also a pseudonym for Gareth Emery, a Trance DJ and Producer.

Based in Southampton, England, Gareth Emery is a producer and DJ of trance music who comes from a diverse musical background that has included classical piano training, jazz, and even a little punk rock. Now ranked #34 in the 2006 DJ Mag Poll, Gareth is definitely a rising star that is catching the ears of the world.
Gareth Emery first came to the attention of the electronic music community early in 2002 when his debut vinyl release, a white label remix of The Shrink's classic 'Nervous Breakdown' was broadcast live on BBC Radio 1 from the Mardi Gras festival on Judge Jules' show. After being championed by a host of DJs including Eddie Halliwell, Guy Ornadel, Scot Project and Dave Pearce, 'Nervous Breakdown' was immediately picked up by Nutrition for an official release and later featured on a number of compilations including the Godskitchen Direct mix album.

Following the hard tech-trance flavour of 'Nervous Breakdown', Gareth turned his attention back to his traditional home of trance with his next release, a double a-side comprised of the tracks 'Psiclone' and 'Flood Control' on his own label Influential. The release picked up considerable support from all the major trance spinners including Armin van Buuren and Ferry Corsten.

However, the track that truly put Gareth on the production map was GTR ? ?Mistral', which was the fourth track he had produced. Never destined to become an anthem, it was produced entirely on a laptop computer over the course of a two week holiday in Provence. Nevertheless, the sole CDR that Gareth sent to Paul van Dyk caused a storm when Paul van Dyk debuted it live on radio from the Nature One Festival, and soon after it was signed by Five AM records, helping it to become a truly global trance anthem. With its driving electro-style grooves and memorable riff, Mistral received huge support from the some of the world's leading DJ's, including Tiesto, Paul van Dyk, Armin van Buuren and Ferry Corsten, and highly positive reviews in all the major UK magazines including Mixmag, Muzik, and DJ. Significantly featuring on Tiesto's 'Nyana' album, 'Mistral' went on to be voted 26th biggest trance record of the year in a poll conducted by Armin van Buuren on his ID&T radio show.

Following his rise to fame, Gareth Emery has made regular appearances at UK superclubs like Godskitchen, Slinky, The Gallery and Passion, has established an international residency in Vancouver, and now frequently plays all over the globe. The remainder of his time is divided between producing genre-defining club tracks under his various guises and running Five AM, one of the UK's premier trance record labels.

Gareth Emery has a distinctive and unique production style that can perhaps best be described as a fusion of trance and progressive, with psy, tribal and techno flavours.

His productions are consistently described as intelligent, driving, melodic and progressive.