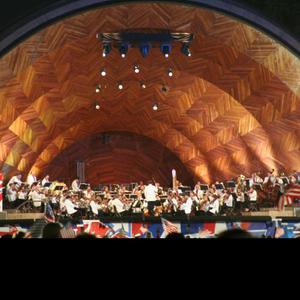 The Boston Pops Orchestra was founded in 1885 as a subsection of the Boston Symphony Orchestra (BSO), founded four years earlier. Careful examination of the rosters of ?Pops" or ?Festival" orchestras, which are associated with a co-resident symphony orchestra in the same community, shows that the principal players of a ?Pops" ensemble usually hold the post of assistant or associate principal of the ?parent" ensemble.

In general parlance, the Boston Pops is described as: ?The Boston Symphony minus the first-chair players." This ?elite core? of BSO musicians constitute a separate subsection of the BSO, and perform alongside the Pops as the Boston Symphony Chamber Players, a 12-member ensemble founded in 1964. These arrangements, and a similar one with the Tanglewood Festival provide year-round employment for the musicians.

Other cities have founded their own "pops" orchestras, but the Boston Pops remains the most famous and well-known.

History of the Pops

In 1881, Henry Lee Higginson, the founder of the Boston Symphony Orchestra, wrote of his wish to present in Boston "concerts of a lighter kind of music." The Boston Pops Orchestra was founded to present this kind of music to the public, with the first concert performed in 1885. Called the "Promenade Concerts" until 1900, these performances combined light classical music, tunes from the current hits of the musical theater, and an occasional novelty number. Allowing for some changes of taste over the course of a century, the early programs were remarkably similar to the Boston Pops programs of today.

The Boston Pops Orchestra did not adopt its own official conductor until 1930, when Arthur Fiedler began a fifty-year tenure as the Pops conductor. Fiedler's career as the conductor of the Pops brought worldwide acclaim to the orchestra. He was unhappy with the reputation of classical music as being solely for elite, aristocratic, upper-class audiences. Fiedler made efforts to bring classical music to wider audiences. He instituted a series of free concerts at the Hatch Shell on the Esplanade, a riverside public park along the Charles River. Along with his insistence that the Pops Orchestra would play popular music alongside well-known classical pieces, Fiedler opened up a new niche in popular culture that encouraged popularization of classical music. Under his direction, the Boston Pops allegedly made more commercially available recordings than any other orchestra in the world, with total sales of albums, singles, tapes, and cassettes exceeding $50 million. Of the many musical pieces produced over the years, the Pops' most famous and popular work is Fiedler's production of Leroy Anderson's composition "Sleigh Ride".

Fiedler's respectful easy-listening arrangements on Arthur Fiedler and the Boston Pops Play the Beatles, released in 1971, opened many eyes to the musical qualities of Lennon and McCartney.

Fiedler is most widely remembered in Boston for having begun the annual tradition of the Fourth of July Pops concert and fireworks display on the Esplanade, one of the best-attended Independence Day celebrations in the country with regular estimated attendance of 200,000?500,000 people. (This event is organized by Boston's Fourth of July celebration under the leadership of David Mugar.) Also during Fiedler's tenure, the Pops and local public television station WGBH developed a series of weekly televised broadcasts recorded during the Pops' regular season in Symphony Hall, Evening at Pops.

After Fiedler's death in 1979, the conductorship of the Boston Pops was taken over by Academy Award-winning composer John Williams in 1980. Williams continued the Pops' tradition of bringing classical music to a wider audiences, initiating the annual "Pops-on-the-Heights" concerts at Boston College and adding his own considerable library of well-known movie soundtracks (including the Star Wars and Indiana Jones movies) to its repertoire.

Keith Lockhart assumed the post of principal Pops conductor in 1995. Lockhart continues to conduct the Boston Pops today, adding a touch of flamboyance and a flair for the dramatic to his performances. Williams remains the Laureate Conductor of the Pops and conducts a week of Pops concerts most years. Lockhart brought in numerous pop-music acts to play with the orchestra, including Rockapella, Guster, My Morning Jacket, Aimee Mann and Elvis Costello.