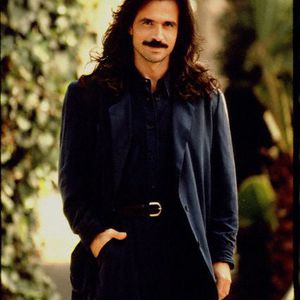 Yanni (real name: ??????? ??????????? / Yiannis Hrysomallis) born in November 14, 1954 in Kalamata, Greece, is a Greek self-taught pianist, keyboardist, and composer. Although many fans and critics call his music new age, Yanni himself has distanced himself from that label. In his autobiography, Yanni devotes an entire chapter to the subject, stating that he prefers to call his music contemporary instrumental.

Although many fans and critics call his music new age, Yanni himself has distanced himself from that label. In his autobiography, Yanni devotes an entire chapter to the subject, stating that he prefers to call his music contemporary instrumental.

Yanni is a self-taught pianist who began his musical career by giving recitals for family members though he had no formal training and could not read a note. At the age of 18 he attended the University of Minnesota. While a student there, Yanni joined an up-and-coming local group called Chameleon where he met drummer Charlie Adams. Chameleon earned some modest commercial success touring throughout the Midwest. After receiving a B.A. in psychology, he sought a life in music. He moved to California in pursuit of movie soundtrack work. In 1987 he put together a small band which included John Tesh and Charlie Adams, and began touring to promote his earliest instrumental albums, Keys to Imagination, Out of Silence, and Chameleon Days.

In 1992 Dare to Dream was released. It was Yanni's first Grammy-nominated album and featured "Aria", a song based on The Flower Duet and popularized by an award-winning British Airways commercial. A second Grammy-nominated album, In My Time, was released in 1993. His music has been used extensively in television and televised sporting events, including the Super Bowl, Wide World of Sports, Tour de France, World Figure Skating Championships, The Olympics, and ABC News.

Yanni's breakthrough commercial success came with the release of his album and video, Yanni Live at the Acropolis, filmed on September 23, 1993 at the 2,000-year-old Herod Atticus Theater in Athens and released in 1994. This was Yanni's first live album and utilized a full orchestra under the supervision of the Iranian conductor, Shahrdad Rohani, in addition to his core band. Subsequently, the concert was broadcast in 65 countries and seen by half a billion people. It has almost continuously remained on the charts since its release and is the second best-selling music video of all time, selling more than 7 million copies worldwide. A composition from this album, "Acroyali/Standing in Motion", was determined to have the "Mozart Effect," by the Journal of the Royal Society of Medicine because it is similar to Mozart's K 448 in tempo, structure, melodic and harmonic consonance and predictability.

In March 1997, Yanni became one of the few Western artists permitted to perform and record at the Taj Mahal in India. Later that year he performed at the Forbidden City in China. From these two events he created his next live album and video, Tribute, which was released in 1997. Armen Anassian, Conductor, concedes that he had some doubts about the artist's plans to perform at India's Taj Mahal and China's Forbidden City for Tribute: "To be honest, a few years ago when he was talking about it, the idea was so amazing. I myself was very skeptical, understandably so. But the truth is, it happened. We did it." Anassian describes Yanni as "very optimistic" and has observed that "nothing really fazes him." That outlook carries over naturally to his music. "I don't think it's a goal, per se. He's very honest with his own feelings. His music really comes from the heart. He writes music with ease, the music comes out with relative ease. The feel-good portion of the music is a by-product. It coincides with what the people love to hear." Lighting Designers Lee Rose and David "Gurn" Kaniski received an Emmy nomination for "Outstanding Individual Achievement in Lighting Direction (Electronic) for a Drama Series, Variety Series, Miniseries or a Special" for both Live at the Acropolis and Tribute .

In 2000, after a two-year sabbatical, Yanni released his first studio album in seven years: If I Could Tell You.

Yanni also toured in 2003?2004 with the debut of the Ethnicity album extending his "One World, One People" philosophy. This album sparked what would become the 4th largest concert tour of the year ranked by Billboard Magazine.

He kicked off his 2004?2005 "Yanni Live!" tour at Mandalay Bay in Las Vegas, Nevada, and his next live album and video, Yanni Live! The Concert Event was released in 2006.

In His Purest Form

The Dream Concert: Live From The Great Pyramids Of Egypt