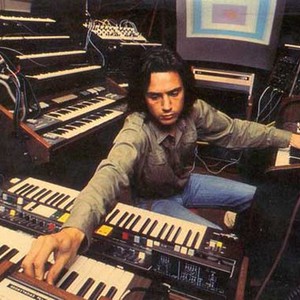 Born Jean-Michel Andr? Jarre on 24 August 1948 in Lyon, France this composer, performer and music producer has performed under the name Jean Michel Jarre since 1991. He is regarded as a pioneer in the electronic, synthpop and New Age genres, as well as an organiser of outdoor spectacles of his music which feature lights, laser displays and fireworks. This includes the 1997 New Guinness Book of Records entry for the biggest concert ever with 3.5 million watching at Moscow's 850th anniversary. Jarre has sold an estimated 80 million albums and singles.

Jean-Michel is the son of famous French composer Maurice Jarre, and he studied music from his childhood. In 1968 he joined Groupe de Recherches Musicales (Music Research Group) directed by Pierre Schaeffer, where he began to write electronic music. In 1970 he released the singles La cage and Erosmachine, and in 1972 - his debut album Deserted Palace.

Meeting Francis Dreyfus played an important role in Jean-Michel's biography. He produced Jarre's gold-awarded Oxygene (1976), that took Grand Prix Du Disque award from the Charles Cross Academy. The music of Oxyg?ne sounds very relaxing and cosmic-like. Following albums Equinoxe (1978) and Les chants magn&eacute;tiques (1981) gave Jarre the title of one of the best electronic composers and performers from France. Jarre is very influential in both new age and ambient.

Most of Jean-Michel's concerts are on the large side using cityscapes as their backdrops (Rendez-vous Houston, Destination Docklands, La Defence in Paris). He was included in the Guinness Book of Records for his show at Place de la Concorde in Paris on July 14, 1979 (Bastille Day), which was visited by more than one million people. Another Guinness record is release of his album Music for Supermarkets - only a single copy was ever pressed.

Welcome To The Other Side (Concert From Virtual Notre-Dame)