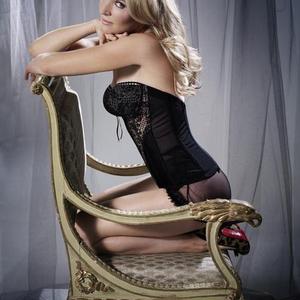 Australian born DJ turned pop star who, despite having an earlier club hit with Bass Culture, shot to international fame in her own right after being selected to represent the United Kingdom at the Eurovision Song Contest in 1996. Her song, 'Ooh Aah... Just A Little Bit', failed to impress Eurovision judges, but was a huge commercial hit in the UK (reaching #1). It was also a chart success right across Europe and in the United States. Further hits followed including "I Belong To You", "Ti Amo", "Fresh", and "Gimme Some Love" - all taken from the hit album "Fresh".

Gina rapidly became a gay icon, with fans queuing right around the block outside London's G.A.Y. club to see her perform. Inside, 2,000 people would chant her name before her performances.

Then it all went sticky. Gina got caught up in a contractual dispute with Steve Rodway (Motiv 8) and ceased recording.

Her first comeback was a mute affair, providing backing vocals on album tracks for Soda Club. Comeback attempts on ITV's "Reborn In The USA" and in the 2005 UK Eurovision heats proved fruitless.

A more successful return to the commercial pop arena came in October 2006, when club chart topper "Tonight's The Night" - from the album Get Up & Dance - received a full UK release via Gina's Stuntgirl label. Whilst both single and album failed to trouble the top 40 (the single debuting and peaking at #57), Gina demonstrated that artists with a niche following could still enjoy support without the backing of major labels or radio play.

Motherhood again took priority, but it was back to recording and releasing in 2011 with the Discipline Music issued 'Next 2 You' (featuring Vigilante) heralding a return to the spotlight.

I Belong To You