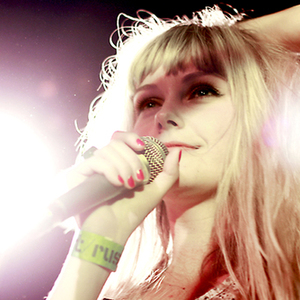 The Asteroids Galaxy Tour is a psychedelic pop band which formed in 2007 in Copenhagen, Denmark. The band currently consists of Mette Lindberg (vocals), Lars Iversen (bass, keys), Mikkel Baltser D?rig (guitar, keys), Miloud Carl Sabri (trumpet, keys) and Rasmus Valldorf (drums). Their debut album, "Fruit" was released in 2009 on their own Small Giants label. The band's single "Around the Bend" was featured in an iPod Touch commercial in December 2008.

Speaking with Songfacts in an interview, Iversen explained how the song got in the Apple commercial: "We have this company working for us in the States called Synch, and they got in touch with Apple. I think they had this meeting with Steve Jobs himself, and he picked that song out of the bunch and said, 'This is it, this is the new track for the iPod Touch.' Apparently he just loved that track, but we never saw it as one of our singles. We have some other songs that we thought would be great singles, and that would work cool on for the radio, but he really loved that song."

The Asteroids reached instant global exposure when their song Around The Bend was featured in an Apple iPod Touch advert in late 2008. Their music also appeared in US hit TV series Gossip Girl, CSI Miami as well as Chuck.
Around The Bend was also chosen as one of the key tracks to the R.J. Cuttler documentary "The September Issue", based on Vogue editor-in-chief Anna Wintour.

Right now, their song "The Golden Age" is featured in the latest Heineken advert "The Entrance" from 2011.

Their first show ever was as opening act for Amy Winehouse in their local Copenhagen and Katy Perry chose The Asteroids as opener for her European tour summer of 2009.
The band spend most of 2009 touring all around Europe and the US with their six piece live band which includes trumpet, saxophone, drums, guitar, keys, bass and more...

Addictive quirky soulful Pop Music with attitude,
sweeping musical arrangements with one of the hippest vocals around, Known for their infectious live shows, shiny, shimmering, upbeat pop, albeit with a horn-infused, slightly psychadelic edge, C-walking, up rockin' leg-splitting and hip-shaking their way through, infusion sound like no other,
effervescent music that reminds you of a dozen glorious summerskaleidoscopic monster, bubbly and hypnotic...

At the moment they are busy recording new material for future releases and getting ready for playing their "FRUIT" spring/summer tour around the world for festivals and club shows.

Make sure you don't miss out a show near you, and go check out their tour plan, new dates will be updated.