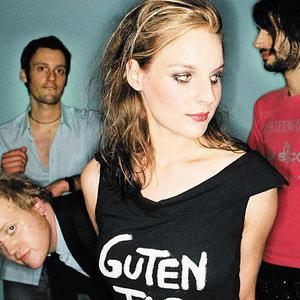 Wir sind Helden (English translation: "We are heroes") is a well known German rock act formed 2000 in Berlin, Germany. In 2003 they were among the first bands to kick off a still ongoing trend for up tempo rock songs sung in German. Examples of other successful bands following that trend are Juli and Silbermond. They are part of a second wave of the "NDW", the "Neue deutsche Welle" or (New German Wave), that originally brought fame to artists like Nena years ago.

They are part of a second wave of the "NDW", the "Neue deutsche Welle" or (New German Wave), that originally brought fame to artists like Nena years ago.

The four members of the band are Judith Holofernes, Jean-Michel Tourette, Mark Tavassol and Pola Roy. They met during the Kontaktstudiengang Popmusik, a study program in Hamburg, Germany. They introduced themselves with the single "Guten Tag" (Good Day) and had the pop star Nena wear a T-shirt with the song title and band name on the back, thus promoting the unsigned band. In a similarly clever move, they chose Gekommen Um Zu Bleiben ("We've come to stay") as the first single to be released off their second album, Von hier an blind, which was released in 2005.

They've made it a habit to, every time they tour, play a concert in the German town of Helden.

With the birth of Friedrich, the son of Judith and Pola, the band took a break throughout the Winter of 2007 with plans to get back together in Spring and begin recording their next album.