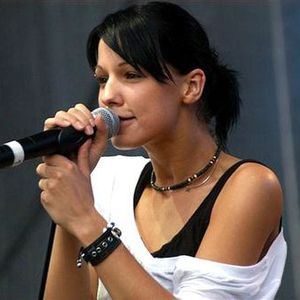 Christina St?rmer (born June 9, 1982) is an Austrian pop/rock singer and also the name of her band. After working at a bookshop in Linz and singing in several bands, she reached #2 in Starmania, an Austrian music casting TV show. Her first song was "Ich lebe" (I Live) released in 2003, which was very successful in Austria and was followed by several #1 hits. In 2004 the song "Vorbei" (Over) reached the German Top 100, and in April 2005, a new version of "Ich lebe" was produced especially for the German and Switzerland market.

Christina came from a very musical family. At the age of thirteen she played the saxophone in a jazz band. In addition to the saxophone, she also played the transverse flute. In 1998 she sang in a cover band which she had founded, named "Scotty", which played mostly English language songs. She was also a member of an a cappella group named Sulumelina. After dropping out of high school, Christina began an apprenticeship with the bookstore, Amadeus. A few months after that she applied to Starmania.

In 2003, St?rmer won second place in Starmania behind Michael Tschuggnall. Shortly after that she released her first original song, "Ich Lebe" (I Live) which in 2003 occupied the number one spot on the Austrian music charts for nine weeks.

Beginning her career in Austria

After "Ich Lebe" followed two more highly successful singles: "Geh nicht wenn du kommst" (Don't Go When You Come) and the anti-war song Mama (ana Ahabak) (Arabic for Mama, I Love You) which originated during the war in Iraq. The song represents a little Iraqi girl's perspective of the war, and it also spent nine weeks at the number one spot on the Austrian charts. Her first album, Freier Fall (Free Fall), was released exclusively in Austria in May 2003, and it also rose quickly to the top of the charts, where it occupied the number one spot for weeks. In fall of 2003 she did an Austrian tour behind the strength of her first album.

In May 2004 her second album, Soll das wirklich alles sein (Should that really be all) appeared, again only in Austria. The album was even more successful than Freier Fall, (Free Fall) but the album's singles had only average sales figures. The Wirklich alles! (Really Everything!) tour in Austria followed in the fall. The highlight of this tour was the concert at Vienna city hall in November, which sold out all 11,000 tickets in a very short time. The concert was filmed, and along with some interviews and a short biography, was released in DVD form as Wirklich alles! During the club tour that began directly after the Vienna concert, she presented for the first time her own original compositions, which she had written with her band.

At this time, Christina and her managers, Andreas Streit and Bernd Rengleshausen, were working towards breaking through in Germany. The single Vorbei was released in Germany in November 2004, but it fell short of expectations. In April 2005 a re-worked version of "Ich Lebe" was released in Germany. This single met with great success; it rose to ninth place on the German charts, and shortly thereafter reached number four.

The album which followed, named Schwarz Weiss (Black & White) was released in June 2005, in Germany and Switzerland, reached number three on the German album charts, and stayed in the top twenty for more than a year. The majority of the songs on this album, which were mostly already known in Austria, were reproduced and oriented towards the emerging trends in German rock and pop music. The singles were "Engel fliegen Einsam" (Angels Fly Lonely) "Mama (Ana Ahabak)", and "Immer an euch geglaubt" (Always Believed In You). The singles were also re-recorded to be more rock oriented. In late 2005 Christina and her band toured through Germany and Switzerland. The Schwarz-Weiss tour, with just under 40 concerts, lasted two months, in which some concerts had to be relocated to larger halls because of the great demand for tickets. Christina St?rmer and her band had established themselves as a major group.