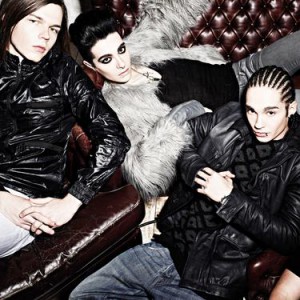 Tokio Hotel is a German band founded in Magdeburg, Germany in 2001 by singer Bill Kaulitz, guitarist Tom Kaulitz, bassist Georg Listing and drummer Gustav Sch?fer. The four met in 2001 after a live show in a Magdeburg club, where Listing and Sch?fer, who knew each other from music school, watched from the audience while Bill and Tom Kaulitz played on the stage. After Bill Kaulitz's participation in a children's Star Search in 2003 at age thirteen (which he lost in the quarter-final), he was discovered by music producer Peter Hoffmann.

After Bill Kaulitz's participation in a children's Star Search in 2003 at age thirteen (which he lost in the quarter-final), he was discovered by music producer Peter Hoffmann. Devilish changed their name to Tokio Hotel: ?Tokio? is the German spelling of the Japanese city Tokyo, due to a love of the city, and ?Hotel? due to their constant touring and living in hotels.

Soon after Sony BMG took them under contract, Hoffmann hired David Jost and Pat Benzner into the team of creators and authors, and had them give the teens instruction on songwriting and instrument playing; most of the songs of the first album were written by Hoffmann, Jost and Benzer (including the singles Scream and Rescue Me which were completely written by them), only the single PlayUnendlichkeit was written completely by Tokio Hotel themselves. However, shortly before release of their first album, Sony terminated their contract. In 2005, Universal Music Group took Tokio Hotel under contract and developed a marketing plan. The band has now become one of the biggest acts from Germany.

Tokio Hotel recently released their new album "Humanoid" (In both English and German versions) in Europe.