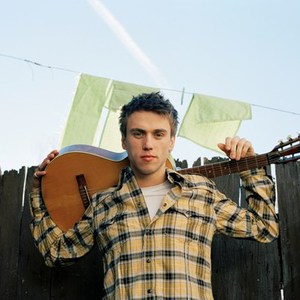 Clueso (born 1980 as Thomas H?bner in Erfurt) is a German singer, rapper, songwriter and producer. Clueso, named after Inspector Clouseau in The Pink Panther, started making music in 1995. In 1998 he got to know his future manager Andreas Welskop and canceled his apprenticeship training in hairdressing. His first vinyl Cl?solo was released on BMG Ufa the same year. In 1999 he moves to the 10vor10-Studios in Cologne with Welskop.

A year later he signs a label contract at Four Music and releases Text und Ton in 2001. Around that time he performs with Curfew at the MTV HipHop Open in Stuttgart and at Beats for Life in Cologne.

In 2002 Clueso moves back to Erfurt and records the Rowdy-Club-Tape 2002. Another year later he starts producing his second album "Gute Musik" (featuring Blumentopf, Steer M, Tilmann Jarmer, Delhia, Tim Neuhaus and J?rgen Kerth), which was be finished by 2004. It does not contain any English tracks and concentrates on singing rather than rapping. In 2005 Clueso represented Thuringia with the song "Kein Bock zu geh'n" at the Bundesvision Song Contest. The same year he was partner of Start Ab, the 'biggest non-commercial remix contest in Europe'.

In 2006 Clueso released his third album called "Weit Weg" which means "far away". Again the album was relased by Four Music. The album is changing mood and style contiuously. It varies between influences of chilled pop, soul, funk and reggae.

Over the last two years Clueso toured with his band. They played over 120 club and festival gigs with a total crowd of 300,000.

On the album Clueso joined forces with the likes of Max Herre (former lead singer of Freundeskreis), Flowin'Immo, New Telephatics and Razkajam.

Ralf C. Mayer who also had produced "Gute Musik", the forerunner of the current album, and artists like Xavier Naidoo and Die Fantastischen Vier helped Clueso to find his sound, from sounds of whisper to grolling bitter thunder.

Clueso is truly one of the future stars in Germany as he is focused, talented and lucky enough to find a channel for his passion.