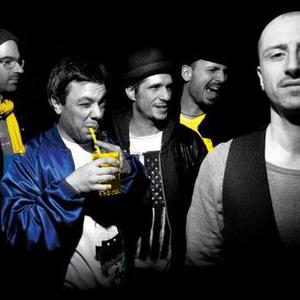 Blumentopf (ENG: flower pot) is a Hip-Hop act from Munich, Germany. Their first Album ?Kein Zufall? (eng. ?No Coincidence?) was released in 1997. Meanwhile, Sepalot, Roger, Heinemann, Holunder and Schu could establish a reputation as one of their genre's best live act. In the years 2001 and 2002, the readers of the Hip-Hop magazine ?Juice? confirmed that reputation by awarding them the title for the best live band.

Insiders appreciate the band especially for the high standard of their lyrics and rhymes. However, their popularity and thus their commercial success have never reached the level of other German Hip-Hop acts such as Absolute Beginner and Fettes Brot.

Text and music:
Telling storys, one of the two main components in the field of rap, dominates most of their lyrics. By means of humor, irony and word joke, stories of every kind can be found on the four albums they've released so far. Besides everyday situations (?Warum Eigentlich Nicht?, ?Warten?), relationship troubles (?Was&lsquo; Der Handel?, ?Alles Gute?, ?Das Eine?) and fictitious tales (?Von Disco Zu Disco?, ?Block Und Bleistift?), they even comment on more serious social and political problems (?Reden Ist Schweigen?, ?6 Meter 90?, ?Danke Bush?).

Battle-Rap, the second key feature, plays only a minor role. According to their relaxed attitude, they rather talk about themselves in a self-deprecating way than running down other artists.

The beats, often produced by DJ Sepalot, developed constantly over the years. While the first three albums, especially the debut, are based on funk, jazz and soul samples, creating an oldschool sound, the fourth album ?Gern geschehen? contains strong synthetic beats and extraordinary ideas such as ?Jeder zweite linkt Dich?, which is composed solely of short score samples.

Over the past years, several band members have learned how to play the guitar and other instruments, which allows them to play parts of their songs on their own. The DVD ?Gern Geschehen? that contains scenes from their last tour includes a live track.

Recently, German television discovered Blumentopf's rap talents. In the context of the football world championship taking place in Germany, the 5 rappers commented on the football matches of the German team, the two semi-finals and the final.